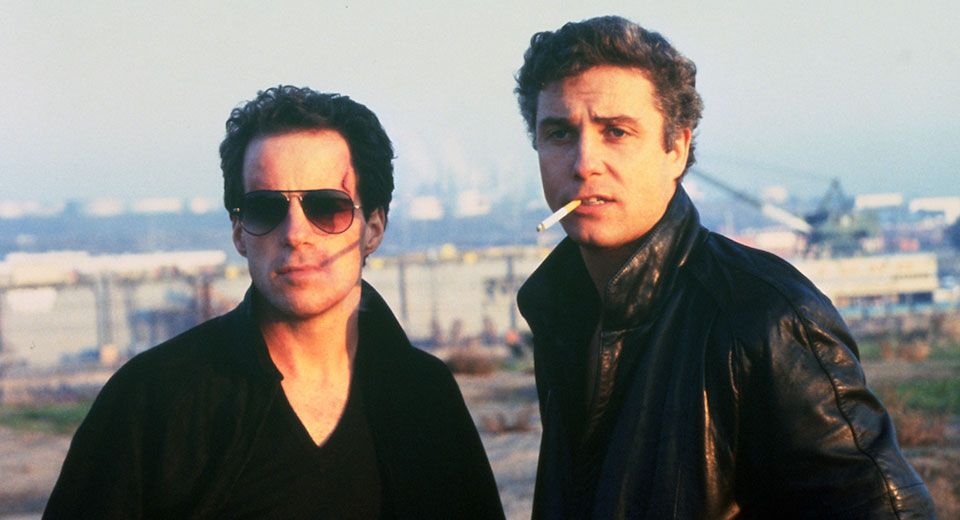 Since its 1985 release, William Friedkin’s ever-hip cat-and-mouse thriller To Live and Die in L.A. has attained canonical status – both within the era’s golden age of mid-budget action films, and the director’s own extensive oeuvre. In a career littered with heists, cons, and car chases, Friedkin’s adaptation of U.S. Secret Service Agent Gerald Petievich’s semi-autobiographical novel stands apart as a conflicted exhortation of an era beset by excess. Gone are the coarse working stiffs that populated The French Connection, Sorcerer, or The Brinks Job. Instead, we are treated to young Willem Dafoe as quintessentially ‘80s villain Eric “Rick” Masters, head of a counterfeiting operation that provides much-needed capital to would-be dope-peddlers and streetwalkers. Suave and rarified, Masters shares more in common with the modern-day stockbroker than a Friedkin hood of yore. Truly, there is no finer embodiment of the get-rich-quick fever of Reaganomics than a man who takes time to dabble in the arts and literally prints his own money.

It is Masters’ slippery quality, and relative credit in the straight world, that makes him such a satisfying collar. Hot on his tail, Agent Richard Chance – played here by tired-looking perma-bachelor William Peterson – pursues his quarry with a real tight-lipped, Basic Training bravado. A crucial misstep during a stake-out results in the fatal shooting of his three-days-from-retiring, mentor-and-father-figure partner. After this hammy, albeit necessary bit of backstory establishment, To Live and Die kicks into high gear like a jolt of pure Bolivian marching powder. Chance’s sense of duty decays into pure, bloodthirsty revenge, with each step toward Masters taking him further from his profession’s ostensibly moral center. The ensuing two hours of kinetic shoot-outs and pulse-raising montages, bolstered by a synth-heavy score from underappreciated New Wave outfit Wang Chung, are among the most enthralling reels of film heretofore produced by an American studio. With To Live and Die, Friedkin staged not only a comeback, but a kind of back alley coup, and in so doing perfected the iconic visual grammar that would define another twenty years of genre filmmaking.