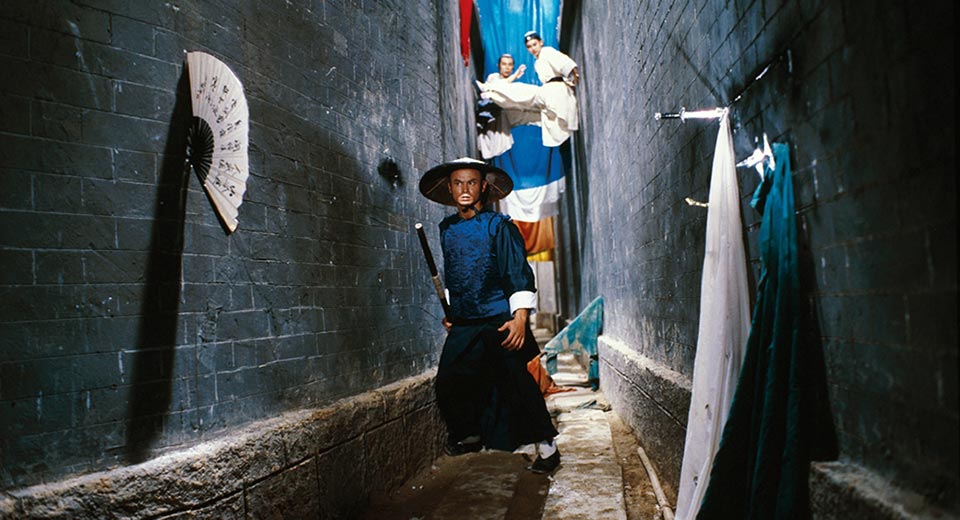 MoMA's series The Grandmaster: Lau Kar-leung wastes no time cementing the director's reputation as a master of style and staging with one hell of an opening salvo: Legendary Weapons of China, arguably the apex of Lau's outstanding career and one of only four films the director, fight choreographer, and actor also wrote.

Quad's Chang Cheh retrospective ably highlighted the better-known Shaw director's "Heroic Bloodshed" style of martial arts; Legendary Weapons is a direct refutation of it. Cheh and Lau had a falling out in 1970 and this film, featuring a female lead to Cheh's brotherhood, a message of nonviolence and pacifism instead of revenge, goofy comedy undercutting tormented angst, and directly mocking Cheh's 'gut stab' convention, where a mortally wounded warrior fights bravely to death, with a fake fight by a conman shoving rubber guts back in, is Lau's clapback.

The film slams onscreen with a jaw-dropping example of Lau's trademark introductory martial arts showcase, studio-shot on minimalist sets to better highlight pure form. Lau's dedication to on-screen authenticity in depicting kung-fu (he was a true master whose Southern Chinese hung gar technique became the Shaw house style) clearly didn't hold him back from supernatural or comedic innovation as the film whips over to deliciously cape-heavy choreography among the Magic Fighters, one of three mystical branches of the Boxer Clan, before moving to the slapstick weirdness of the Spiritual Boxers' voodoo-doll puppet possession technique demonstrated by Lei Ying (Lau's brother Lau Kar-Wing). The third and final Maoshan group, led by Ti Tan (Gordon Liu), have perfected sword-invulnerability, but remain susceptible to foreigners' bullets as seen in a horrifying demonstration his niece Fang Shao Ching (Kara Wai) begs him to stop.

The Chief of the Boxer Clan wants all three branches to find and kill Lei Kung (Lau himself), a former Boxer leader who didn't believe kung fu could defeat western weapons, and disbanded the Boxers' fourth group to spare his pupils' lives before going into hiding. The Chief asks all three branches to send assassins, and Fang, Ti Tan, and Magic Fighter pupil Ti Hau (Hsiao Ho) set off to find Lei Kung, a journey shown using the most dimensional camerawork seen in the often-stagy studio's works.

If you're asking, "but Screen Slate, will I get to see all 18 legendary weapons?" rest assured it's inevitable as an anamorphic lens sweep, and you can't miss a one – the first appearance of each is highlighted with shining characters (edutainment!), and the film's final ten minutes are an epic weapon-on-weapon delight that, at the risk of undermining my professional reputation (or burnishing my marginalized-genre one) had me inadvertently shouting at the screen in sheer awe. It's a fitting way to kick off (pun intended) a well-deserved tribute to an underappreciated legend.