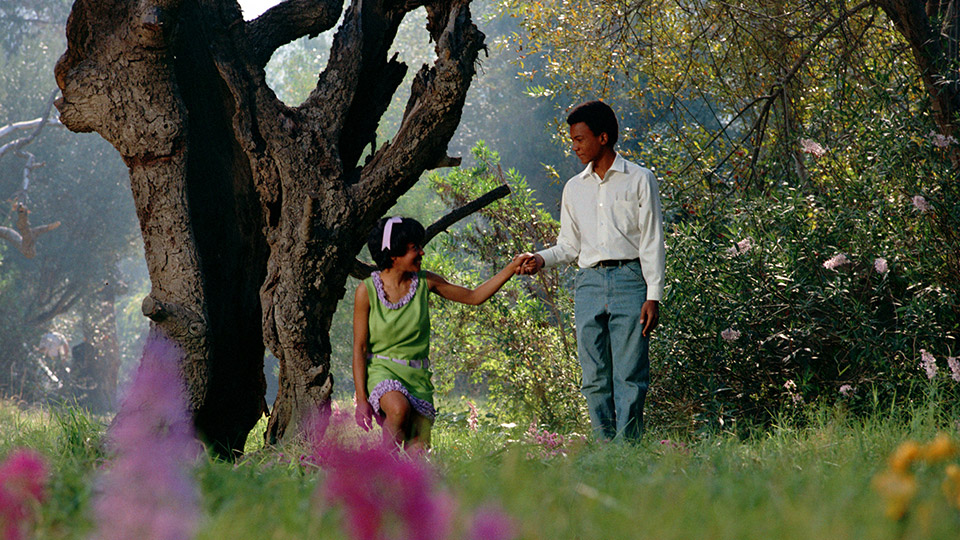 In a 1969 review of renaissance man Gordon Parks’s The Learning Tree, based on the director’s own novel, Roger Greenspun of the New York Times praised the film’s beautiful cinematography (no surprise, given Parks' status as master photographer) but deemed the plot cliched and the acting merely serviceable at best. One may find truth in this, but, these two prerequisites for bourgeois drama aside, the film has something important and unique to offer in the pantheon of films about young boys in overalls learning life’s tough lessons. Parks’s film, the first feature by a Black filmmaker to be financed by a major studio, paints a rare picture of rural Black boyhood and coming of age within a complex web of relationships between Black and white townspeople during the 1920s in a small American farming community. While the performances do come off a bit muted and the plot resembles, at moments, junior high assigned reading—consciously or not, both the story and the acting combine to achieve a Brechtian effect which allows for subtle and not so subtle systemic and psychological dimensions (whether they hold water or not) to emerge from the fog of sentimentality.

The near pathologizing of the actions of Newt, the young boy at the film’s center, and Marcus’, his violent “twin”, is problematic, relying sometimes (but not always) on a simplistic model of causality. Rather than being the last word on nature versus nurture however, the ambiguity the film presents at its best moments invites thinking. The learning tree Newt’s mother speaks of is complicated, and what one discovers as they explore it and its many lessons is that people and their place in society and the world at large is complicated as well. Life requires thought and consideration, which Parks dramatizes through the young Newt’s often pensive expression and slow and deliberate performance.

Parks’s film shows both brutality (police killing unarmed Black men and beating prisoners) and tenderness (Newt’s shy dignity and his Uncle Rob’s poetic daydreaming) and his film’s aesthetics are both conventional and formally unexpected. Pervasive dissolves and match-cuts, which bring to mind formally daring counterculture classics of the era such as Easy Rider (1969) and Sweet Sweetback’s Baadasssss Song (1971), create a dreamy stream of consciousness, the film’s episodic structure evoking wandering thoughts, remembering, thinking. Parks’s vision of reality is one of dependent and interdependent experiences and individuals, and for all The Learning Tree’s nostalgia and schmaltz, it succeeds in presenting a complex, maybe necessarily, imperfect picture of the world that is closer to truth than perfection.