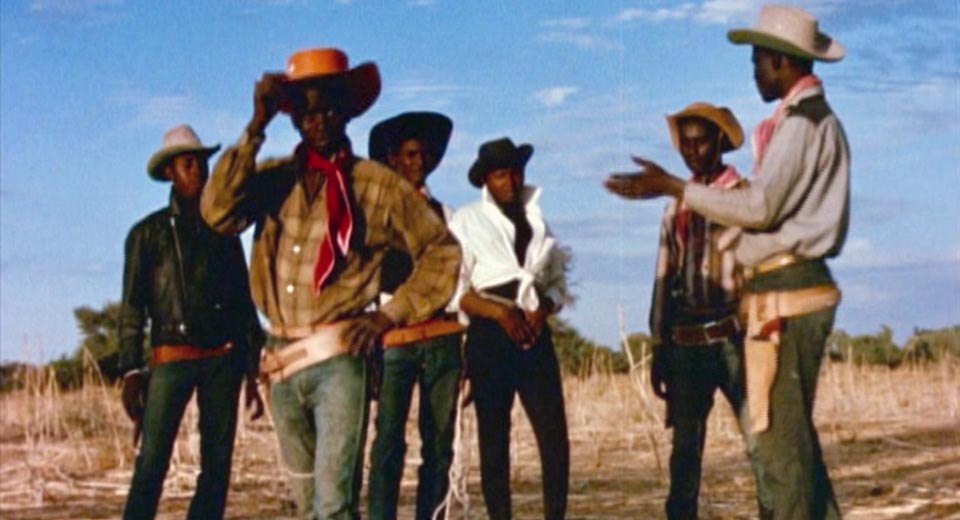 If you watch a lot of films it’s easy to forget about the possibility of seeing something you’ve never seen before. Not simply a story you’ve never seen dramatized or an effect you’ve never seen accomplished, but an image and its attendant possibilities. Once the viewer is fully wrapped up in the fun and originality of Nigerien director Moustapha Alassane’s 1966 film Le Retour d’un aventurier  ("Return of the Adventurer"), he is treated to an image he’s likely never encountered: an African cowboy atop his horse, lasso twirling overhead, chasing a galloping giraffe across the desert.

Le Retour d’un aventurier, which is screening at MoMA on May 12 and 14 as part of the series Moustapha Alassane, Pioneer of the Golden Age of Nigerien Cinema,  tells the story of a young man who returns from abroad (The United States or perhaps the wild west) to his native Nigerien village with a suitcase full of cowboy clothes and goodies (guns, badges, lassos). The returning adventurer gives the gear to his friends and the group transforms into a gang of old fashioned American film “cowboys.” The young people’s new roles as bandits disrupts the rules and values of their village: they steal horses, engage in knockdown dragout fights, and use their six shooters to solve their conflicts. All this rabble-rousing eventually leads to real violence. They clash with the village authorities, leading to severe consequences.

In Le Retour d’un aventurier youthful rebellion takes the form of cowboy antics, but this particular rebellion also cleverly articulates the reality of globalisation and white European cultural domination. The film dramatizes cinema’s double-edged nature as both a potentially transcendent language and a culturally colonizing force. In both the early films in the program (Le Retour d’un aventurier and Bon Voyage Sim ), Alassane’s theme is the traveler who cannot help but be changed somehow by his travels. Alassane himself studied with French cinematic giant Jean Rouch and Scottish-Canadian animator Norman McLaren. His films have a folk logic, they’re funny and gleefully imaginative fables, at their heart however is the sub-saharan African experience (and his own) at the crossroads of film, cultures, and the global politics that shape an artist and a country’s identity.

Serge Moati’s Les Cowboys sont noirs ("The Cowboys Are Black"), the French documentary that accompanies Le Retour D’un Aventurier,  provides viewers with footage of “the first African Western” being made. It is very much the behind the scenes footage a viewer of Le Retour d’un aventurier might be hungry for but utilizes its privileged view to make its own statement. The radicality of the fact that here The Cowboys Are Black is paramount to the documentary. Cowboys however have been black in American cinema since the pioneering films of Oscar Micheaux. In Le Retour d’un aventurier the cowboys are African, adding a new dimension to the global web of cinema, volleying familiar images and ideas back across the Atlantic not unchanged.