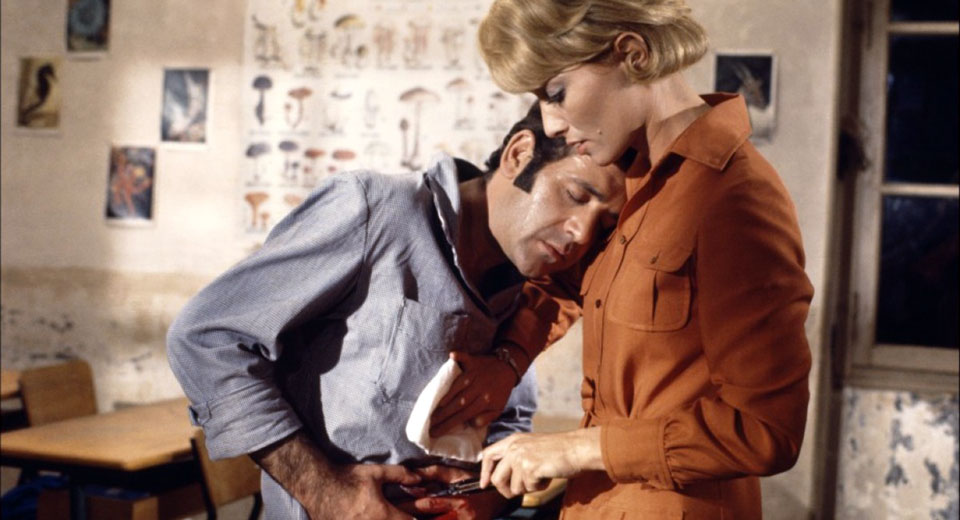 Le Boucher  is just a good old-fashioned love story between a sexy but celibate schoolteacher who scandalously smokes out of doors ("It's more sanitary") and a friendly butcher who can't stop inappropriately reminiscing about the gore and misery he witnessed in his 15 years in the army. Most romances end with a wedding; Claude Chabrol turns this—and much in the usual conception of "romance"—on its head. The film opens with a provincial wedding, where Mademoiselle Hélène and Popaul are seated next to one another, perhaps the only lone wolves in their small, peaceful, mountain-ined environs. They hit it off over Hélène's vague interest and the butcher's uncomfortable commentary on what a "monster" his father was. Odd recognizes odd, and the two become something of an item, with Popaul bringing choice cuts to Hélène's gorgeous bachelorette pad, while their cozy village is rocked by the brutal, unsolved murders of three women.

Hitchcock is a major presence in the film, particularly in a unique cigarette lighter's significance, recalling, of course, Strangers on a Train, a film whose suspense is similarly a twisted intermingling of the threat of discovery and sexual tension. Also similar to Hitchcock is the film's reliance on the soundtrack to build that suspense: particularly a spare, discordant score; the repetitive death-tolling of the local church bell; and Popaul's plaintive calls of "Mademoiselle Hélène!" echoing in the frighteningly empty courtyard below her bedroom window. Were it not for these auditory interruptions and a scene involving a child's sandwich and dripping blood, the film would be a drama of ill-fated romance between two likable characters accepted and even embraced in the small social circle provided by the village.

Is Chabrol suggesting that by withholding intimacy from Popaul, Hélène is responsible for the murders? That if she had simply agreed, politely, to kiss Popaul things might have turned out differently? Probably not, but the film is definitely reveling in the dark humor underlying Popaul's claim that this is the case. Le Boucher skewers the bourgeois values and complacency that both mark the non-lovers as abnormal and encourage that abnormality to flower into deadly realization—a source of humor and violence throughout Chabrol's films, and a refreshingly bleak take on the expectations and satisfaction of the romance narrative in general.