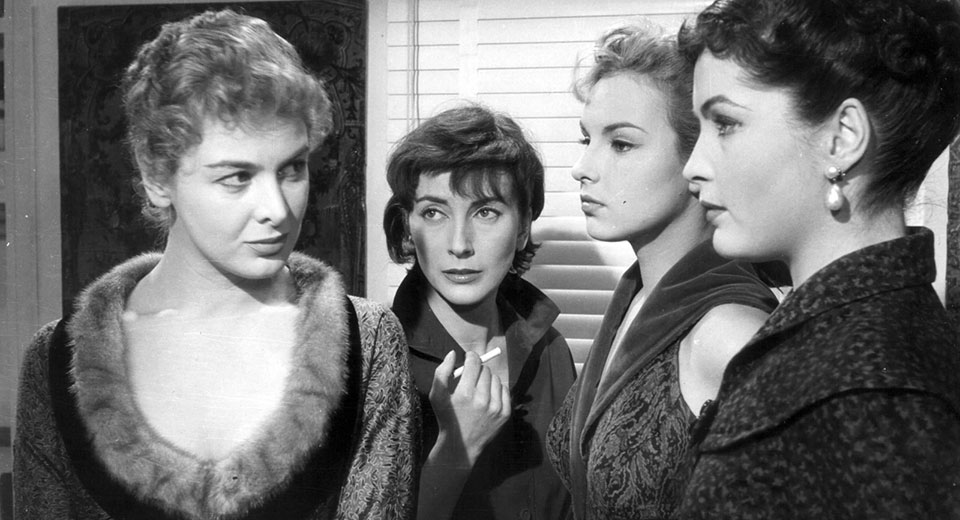 When Michelangelo Antonioni‘s early feature Le Amiche was re-released at Film Forum in 2010, the reviews emphasized its superficial glamor and saw it primarily as a coolly dispassionate snapshot of privileged lives, a “detached look at life among the rich and vapid,” as J. Hoberman put it. A.O. Scott saw it as Antonioni’s attempt to establish his distance from the modest proletarian heroism of the neorealists, a position he would further solidify in the 1960s with L’Avventura, La Notte, and L’Eclisse. But, as James Brown (!) points out in Senses of Cinema, Antonioni in fact made several “concessions” to the neorealists with his “configurations of class,” especially in his early films. Granted, most of the narrative of Le Amiche consists of a series of romantic intrigues among a dozen young and bored members of Turin’s leisure class, but it also brings together characters from different class backgrounds, and the friction produced by the clash of these antagonistic forces can teach us a few things about work, purposefulness, and joy at being in the world.

Clelia (played by Eleonora Rossi Drago, who also stars in Valerio Zurlini’s Estate Violenta) is the manager of a small, Rome-based fashion design firm who has just moved to Turin to open a new store. Seemingly by chance, she meets Momina—a rich, young divorcee and layabout—and her circle of friends. Among them is Rosetta, whose acute boredom has recently led to a failed suicide attempt. Clelia somehow falls in with this crowd and even begins to enjoy their company, but when she becomes enamored with Carlo, the foreman of the renovations being done on the new storefront, her real class-sympathies begin to surface.

Rosetta is convinced that her melancholy (or what would now be pathologized as “depression”) isn’t caused by mere romantic frustration, but by the existential emptiness that dominates her life. As Antonioni himself put it in a letter to Italo Calvino, “love as a motive for suicide, in the film, is nothing more than the last straw in a boredom with living, an inability to connect with life.” All of Rosetta’s choices seem arbitrary and meaningless: “Why go on living? So I can decide what dress to put on?” Clelia, as someone who has “always worked and never had time for friendships,” tries to remedy Rosetta’s feeling of purposelessness by offering her a job. Of course, not needing the work, Rosetta flunks miserably, being inexcusably late or failing to show up. In Clelia’s increasingly intimate exchanges with Carlo, they discover their shared attitude toward work. The importance not only of working but of working out of necessity—of needing the work one does—becomes a recurring theme. Nothing worthwhile is produced through labor that is undertaken merely to dispel idleness; hobbies produce only mediocrity.

But maybe this work ethic lesson is not as unambiguous as I take it to be. A.O. Scott almost seems to envy Clelia’s parasite acquaintances, quipping, “It is not yet La Dolce Vita, with its parties and paparazzi, but this life looks pretty sweet.” Maybe it’s sweet, but it’s sweet like high fructose corn syrup—associated with excess and probably carcinogenic.