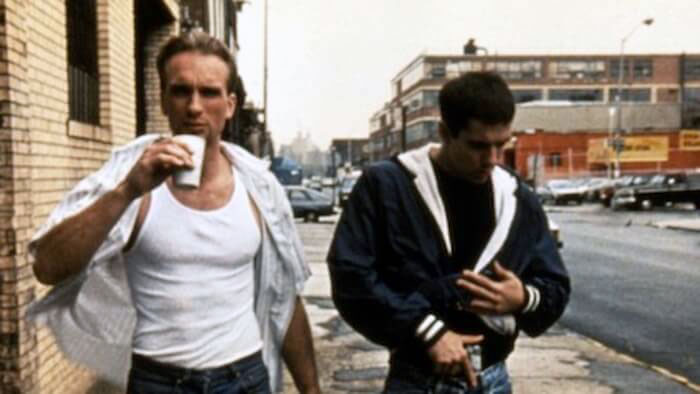 Nick Gomez’s 1992 debut Laws of Gravity shoulders a fair amount of independent film history weight: it’s the inaugural film of NYC production company The Shooting Gallery and features a confluence of talents assembled from within and surrounding SUNY Purchase’s BFA acting and film programs. Aside from its watershed status in 90s New York City independent film, it stands as an early display of its actors’ capabilities, a springboard for performers who were soon immortalized in projects such as Pulp Fiction and The Sopranos.

Loosely episodic, Laws of Gravity captures a few days in the lives of Jimmy (Peter Greene) and Johnny (Adam Trese), two petty criminals who run local scams in their Greenpoint and Williamsburg neighborhoods, which are presented in their depopulated, pre-gentrification days, when guys used the burnt-out warehouses as target practice. This casually illicit day-to-day (Jimmy owes a loan shark; Johnny knowingly failed to appear at a court date) is upended when bad-news buddy, Frankie (Paul Schulze), returns from Florida in a stolen car with brown-bagged illegal firearms in the trunk. What threads much of the ambling film together is Jimmy’s burgeoning impatience with his cohorts; his beloved wife, Denise (Edie Falco) is the only one in his immediate circle who’s gainfully employed, and the hotheaded likes of Frankie and Johnny are starting to grate on him, especially considering the latter’s abhorrent treatment of his girlfriend, Celia (Arabella Field).

Each scene may reach its cumulative point when the roiling chest-puffing and shit talk gets too personal, but cinematographer Jean de Segonzac manages to maintain the remarkable energy in largely unbroken takes. An early scene features Jimmy, Johnny and Celia shoplifting household items from a general store on what looks to be Myrtle Avenue with a surefire routine that, although tense, also plays breathlessly, as if it’s the most natural thing in the world. Otherwise, Gomez and Segonzac ably catch Schulze’s quick grimaces, giddy reaction shots from Field, disapproving looks of Falco’s, and Greene’s piercingly judgemental eyes, achieving a symbiotic relationship between the camera and the restless charisma of the performers.