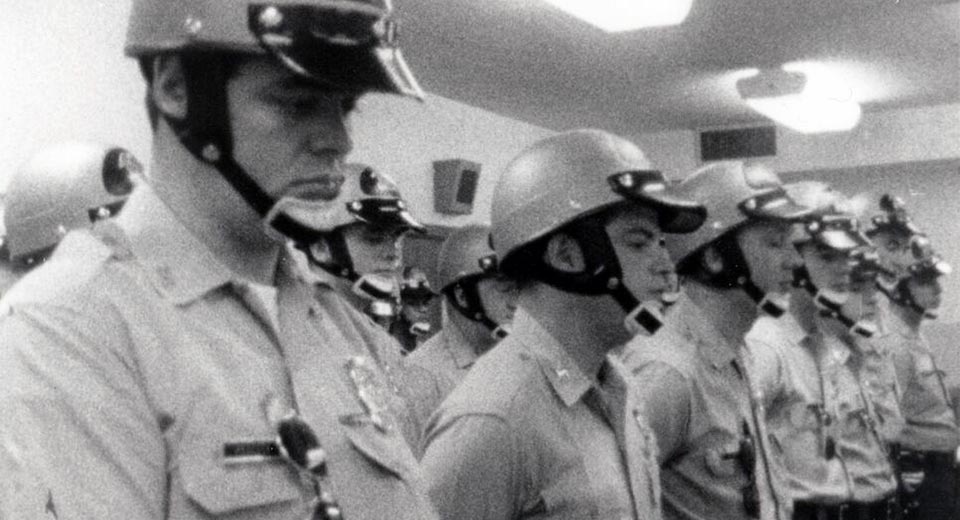 The Police Tapes (1977), which follows cops from a South Bronx precinct going about a routine that they explicitly describe as colonial, was a precursor to Cops (1989–present), which would take a much more exploitative stance and make the poor and insane into objects of entertainment. An even older precursor is Frederick Wiseman’s Law and Order (1969), in which the prolific documentarist followed the Kansas City, Missouri Police Department for six weeks.

After opening credits over slide-projected mugshots, we see a perturbed white woman on the precinct’s phone, saying she was “thrown bodily in a paddy wagon by a negro policeman” and giving us an immediate glimpse of the town’s inhabitants’ assumptions about the way the law works. She’s never been picked up before, and for her this means she’s simply been mistaken for a “criminal”—as if catching criminals weren't by definition the process of snatching people off the street and calling them criminals. We then get a cop’s perspective, who’s asked why he joined the force. His response of a half-minute’s blank-stared silence suggests that maybe he wasn’t looking for anything beyond a pay-check.

In classic liberal newsgathering style, Wiseman is neither pro- nor anti-cop. He's said that “it’s extremely important for the filmmaker to try at least to remain open to the material, otherwise you’re making propaganda.” In Law and Order, this material is brutal enough to leave no doubt about the fluid ethics of policework. An astonishing scene shows a detective strangling a prostitution suspect until she can’t breathe, all the while repeating “Stop resisting.” It illustrates at least two things: 1. That for cops, the word ‘resist’ refers not only to intentional resistance but also to the resistance caused by mere inertia. No one can fully “stop resisting” unless they cease to be a physical body in space. 2. That this detective is not at all ashamed of violence. Wiseman wondered in an interview, “if that cop didn’t think that what he was doing was okay, why on earth would he do that when it was being recorded?” The presence of the camera doesn’t guarantee objectivity, but at least it gives a truthful impression of how people want to be seen.

An institution, according to Wiseman, is “a place that has certain kinds of geographical limitations and where at least some of the people have well-established roles.” Like High School (1969) and Hospital (1970), Law and Order is about one specific instance of the institution under scrutiny. But what is it about in general terms? According to film historian Richard Barsam, it is “concerned with American society’s shift to the right, its emphasis on law and order at home, and its increasing armed aggression abroad.” This is a bit farfetched; the sole reference to “aggression abroad” is an officer and a detainee arguing over their respective military experiences (the cop having been deployed to Korea and the detainee to Vietnam), while the “shift to the right” is only evidenced in a short clip of a Nixon speech, where he vows to “Make America right again.”

Wiseman frequently tells interviewers, “I really have no particular propagandistic or social change solutions to offer, and I’m wary of them generally.” His approach is that of a liberal journalist who follows the democratic adage, “the more information you have, the more informed decision you can make.” In good old empiricist fashion, his emphasis is on facts.