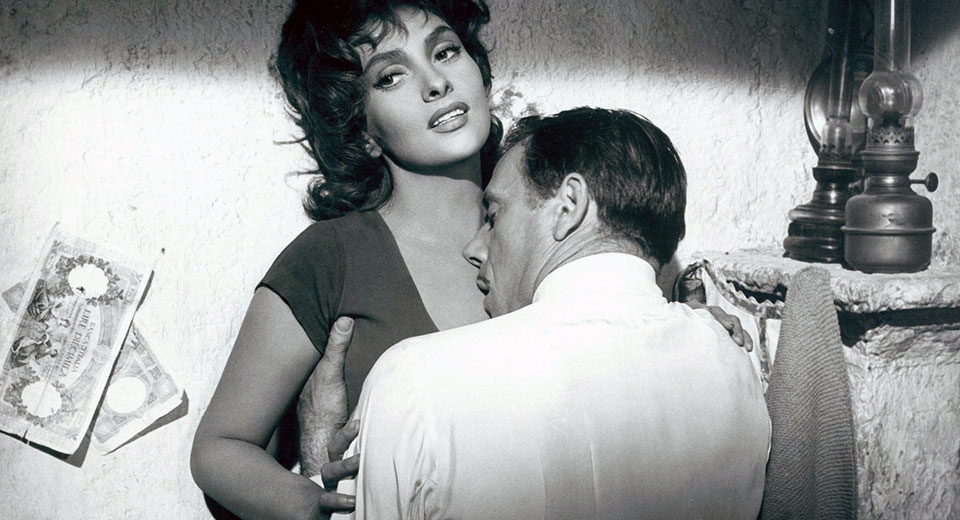 Jules Dassin, the ex-pat director known for heist films like Rififi, The Naked City and Night and the City, turned his camera to the unsatisfied women of an Italian coastal town in The Law, playing this week at MoMA. The Law stars Italian bombshell Gina Lollobrigida as Mariette, a scheming young woman who sees a chance to elevate her stature and escape her boring provincial life, and takes it, consequences be damned.

We first hear Mariette before we ever see her—she is spit-shining her boss Don Cesar’s boots on his balcony, singing a song that reaches windows throughout the town, like a fairy tale princess locked away in a tower. Mariette is the town bad girl, and she drives men crazy—particularly Matteo Brigante (Yves Montand), the town’s ruling crime boss, and Enrico Tosso, an agricultural engineer who has been sent to the town to clean up its marshes. In fact, Enrico promises Mariette he would marry her if she had a dowry, which sets in motion a plan that ends up ensnaring much of the town.

Much of the film depicts the intertwining infidelities happening just below the town’s civil surface: the judge’s wife is in love with a much younger man, the police inspector is carrying on with his sister-in-law, and Brigante treats all women like they belong to him. Male infidelity in the town is a joke, a fact of life; in fact, the entire town seems to live by the motto “Boys will be boys.” The men of the town play the titular game in which one man is declared King, and another his Deputy, and they rule over the group with insults and cruel dares in order to show dominance over one another. This is a world in which men treat women like garbage, and it’s still not enough. When Tonino, Don Cesar’s caretaker, returns from being roundly mocked during The Law, he yells at his wife and daughters: “Since when do women make the law around here?”

Yves Montand was the superstar draw, but more interesting now is to see Mastroianni’s burgeoning charm. Gina Lollobrigida is all determination and low-cut dresses, and the film is surprisingly kind to her. The Law was released in the US as Where the Hot Wind Blows, a much more evocative title that gets to the sweaty, lusty heart of the film. It’s a perfect summer film—close your eyes and you can almost feel the ocean breeze that blows through the trees, even if it’s actually the MoMA air conditioning.