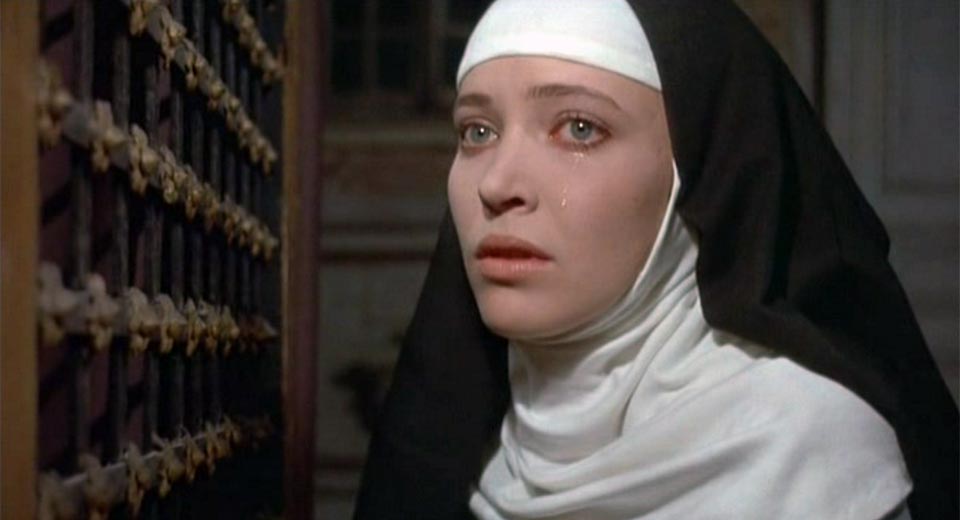 In an opening scene easily mistaken for a Mario Bava set piece, a beautiful young woman is escorted by nearly a dozen nuns to a waiting cardinal as an audience of French aristocrats observes from the other side of steel bars. Suzanne's vows to join an order of nuns resemble an occult initiation or sacrificial offering. "Do you promise to tell the truth?" the clergyman intones. She promises, then rushes the bars, beseeching her parents to free her from the ceremony and her obligation to take the veil. The truth she tells is that God hasn't called her, despite her devotion, and she must not become a nun. Her would-be sisters pry her from the bars and pull a curtain over the proceedings as Suzanne bellows in agony for release. Despite its Grand Guignol opening, La Religieuse (1966), Jacques Rivette's astounding second feature, isn't a horror film concerning evil nuns, yet it vividly demonstrates the claustrophobic brutality of life deep inside the church. In generic terms, it most resembles a prison escape film.

Above all, Suzanne (Anna Karina) seeks freedom. Not freedom from the Catholic church or from God's law, but independence from institutional vagary. The product of her mother's adultery, Suzanne is deprived of an inheritance or the chance to marry. French society of the 18th century has two places for such women: the nunnery or the workhouse. Suzanne understands her miserable prospects outside of the church's grip, but she can't sully her faith by declaring a false vocation. Her mother ultimately coerces her into taking vows, but Suzanne can't recall the ceremony later and comes to see it as a second null imposition on her will to freedom. After she enlists a lawyer to help her escape the veil, the abbey's mother superior sadistically deprives her of every dignity in order to cow her into submission. Suzanne is stripped and starved and shunned and spat upon as her sisters come to believe she's been possessed by the devil. The church patriarchy orders her transferred to a far more liberal convent, but this ostensible reprieve proves no less carceral as Suzanne endures the erotic advances and gamesmanship of a new mother superior. The church offers no path toward God. Only an escape to "society" and its chaos offers Suzanne the chance to validate her passion.

Poisonous hierarchies, both draconian and libertine, imprison Suzanne, whose unwavering yearning for God remains her deepest conviction. Rivette renders the effect with literal bars enclosing the convents, as well as references to guards and the nuns' "cells." Sound effects emphasize heavy locks and adamant bells tolling the daily schedule. As earthly institutions conspire to supplant the divine, Suzanne protects her understanding of freedom in thought and deed as the ultimate expression of God's will.