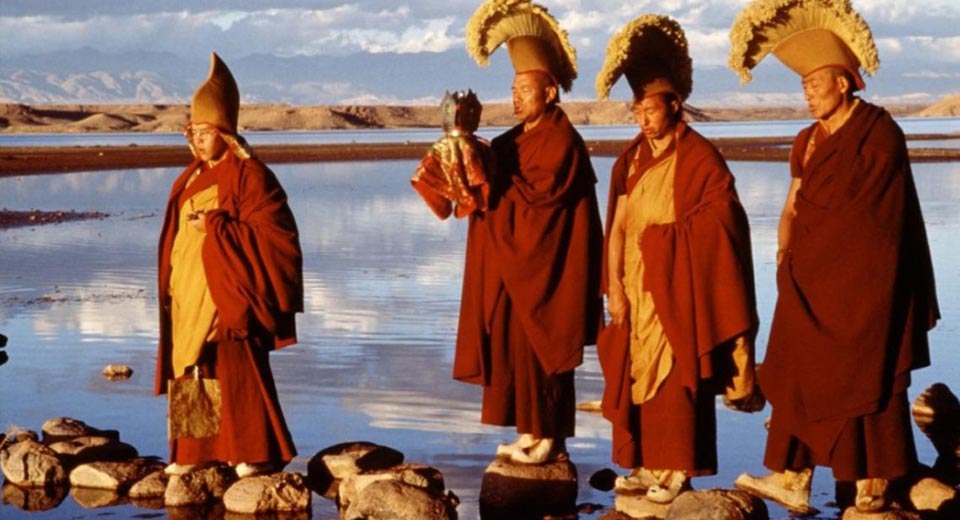 Psychological interiority is something of a Gordian knot in the biopics of Martin Scorsese. Raging Bull and The Aviator both trace the slow emergence of a very dominating and claustrophobic personality trait until it's too swollen to be ignored by its carrier. Goodfellas and The Last Temptation of Christ use extra-literary narrative devices – a retroactive voiceover and a deliberate fantasy sequence, respectively – to tell more philosophical versions of their stories, without betraying whatever Scorsese desperately loves about their antiheroes. But what works for Howard Hughes doesn't necessarily work for the 14th Dalai Lama, so Kundun sees Scorsese and screenwriter Rebecca Matheson attempting to keep exposition at all times teetering between historical facts and impossibly dreamlike visual passages.

If keeping the "bag of tricks" he honed over the prior 20 years, here Scorsese attempts endowing them to a plot very much the opposite of the aforementioned, with a shockingly passive protagonist. The cherubic Tenzin Gyatso solidifies into his role as the Dalai Lama less through will or personality than through observation and reflection, and the film is accordingly flush with images of eyes and of opulent spectacle, locked too perfectly in memory to be accurate. Kundun is narratively "square", but this seems to stem from a resignation to alienness, neither helped nor hidden by the fact that all performers speak in heavily accented English. The aim is moreso a rumination on the Dalai Lama's life and times than evidence that Scorsese and Matheson got the best scoop on what it was actually like.

There's not a world of difference in the way a Cream song is used in Goodfellas or given track of Philip Glass's Kundun score. A character will unlock a new theme in their dialogue, and the music will begin to quietly swirl around the coming shots – often culminating in a moment of silent despair or a mind-blowing psychedelic tableaux. Like Glass' score, the film is avowedly expensive and studio-made, a lush homage to a foreign aesthetic rather than some kind of attempt to master it. Stereotyping is inevitable (Scorsese's cartoonish depiction of Mao says a lot about the project) but the conscious strain to keep things at a classy remove makes for a steadily escalating, hypnotizing experience. Whatever its shortcomings, Kundun is ultimately one of the least meta pictures Scorsese ever directed, like a sacramental Tibetan "fusion" of Pasolini and Minelli.