Kuhle Wampe, or Who Owns the World? 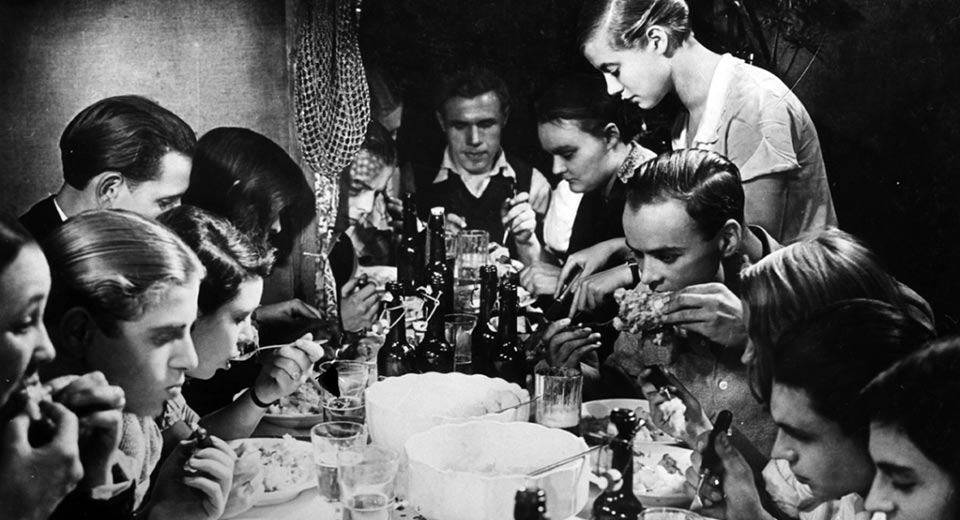 Looking for a spooky social realist romp in 16mm? Look no further than Berlin, 1932: The German national economy has collapsed, driving thousands of people out of their jobs, homes, and comfort zones, forcing them to relocate to a thriving shanty town called Kuhle Wampe (“empty belly”)—a Weimar equivalent of America’s Hoovervilles. Slatan Dudow and Bertolt Brecht’s Kuhle Wampe, or Who Owns the World? plays tonight at Light Industry, hot on the heels of another hybrid doc-fiction film centered on social struggle (last weekend’s sold-out 14-hour Peter Watkins marathon).

Banned shortly after its premiere, then censored and forgotten until its 1999 restoration and re-release, Kuhle Wampe has that same disquieting effect as contemporary social docs like The Act of Killing or Grizzly Man insofar as one cannot help but be amazed at the intimacy and access afforded as a result of the film. Wampe serves as an extraordinary archive of ordinary Germans in situ in settlements bursting with political energy—images strangely familiar as those that appear on today’s livestreaming newsfeeds, but which were captured nearly a century ago. The resultant effect is doubly distancing: first by design (Brecht), and again by the passage of time (84 years to be exact). The feeling is as if one had time-traveled back a few generations, only to find oneself exactly where one started: standing on the other side of a two-way mirror.

Best of all, you get to watch it to a singspiel score by composer Hanns Eisler—famously decried as a “the Karl Marx of music” by the House Committee on Un-American Activities—whose ironic last words upon deportation bear repeating:

“As an old antifascist it became plain to me that these men represent fascism in its most direct form. That they represent the ignorance and barbarism which could lead to a new war. I was against them... Now I am forced to leave. But I take with me the image of the real American people whom I love.”

Image indeed. With this in mind, Kuhle Wampe will burn a hole in your heart if you let it—even more so if you put up a fight. But don’t be fooled by its historical significance; the film isn’t as somber as its Wikipedia would have you believe. There’s loads of laughs to be had at Light Industry tonight. A great date flick! Lots to talk and think about… and be thankful for.