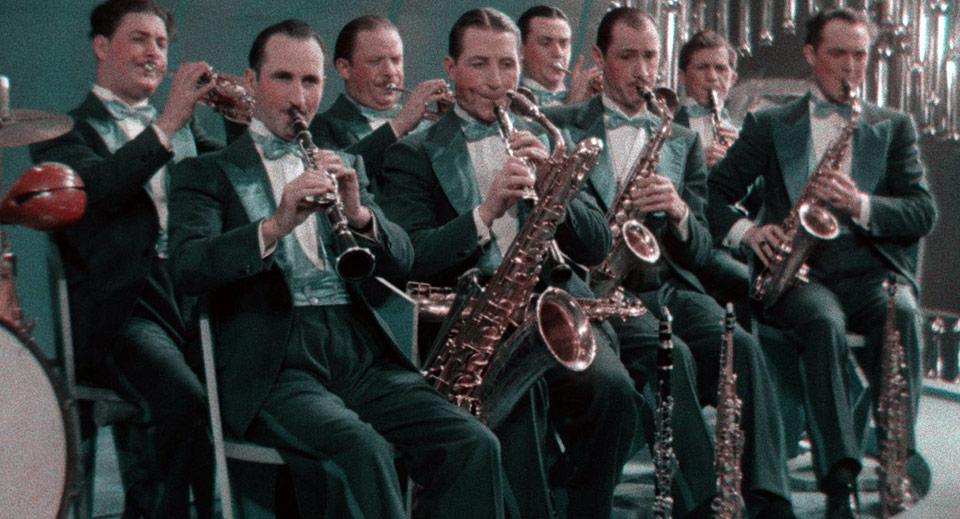 It doesn’t take a jazz historian to get queasy watching a caucasian bandleader (named Whiteman, no less) present a genealogy of the genre in which various western European musical traditions serve as major forebears. In the 1920s the popular music press dubbed Paul Whiteman “King of Jazz,” an appellation he lent to a two-color technicolor feature film in 1930. The film is a theatrical revue structured as a series of re-enactments from Whiteman’s musical scrapbook -- visualized onstage between gags as a 12-foot behemoth. Full of surprisingly funny sketches, dazzling dance numbers and decidedly unjazzy pre-war music, King of Jazz is ultimately a handsome and problematic experience.

The Technicolor photography provides the ambivalent visual pleasure of a thick, peaches-and-cream color palette that turns white faces into fairy tale illustrations, making the absence of black skin in a film ostensibly about jazz all the more dispiriting. In postmodern hindsight, a film with “jazz” in its title bears a great historical weight. It’s that word that looms over the extravaganza. Depending on who you ask, Whiteman was a crass appropriator or a serious jazzhead bent on elevating the form. He’s there at the end as a mad scientist, furiously stirring a literal “melting pot” of jazz. It’s constituents? Bagpipes, French accordions, balalaikas and Irish jigs.

The film’s less fraught pleasures involve the tension between the narrow confines of the stage and the expansiveness of the proceedings. A stagebound musical can’t help but seem restrained to the cinema audience. But our sense of its spatial limits approximate surprisingly well aspects of live entertainment while supplying an intriguing detachment. Our suspension of disbelief wavers as we see visible evidence of the spectacle’s hard boundaries -- backdrops, black curtains, the proscenium arch -- encroach upon dance numbers so crowded and exuberant they might spill into the street. The cinema’s rigid frame circumscribes this push-pull and amplifies the vertigo.

To whatever extent one can (or desires to) put “jazz” out of mind, King of Jazz offers confectionary charm and genuine razzle-dazzle.