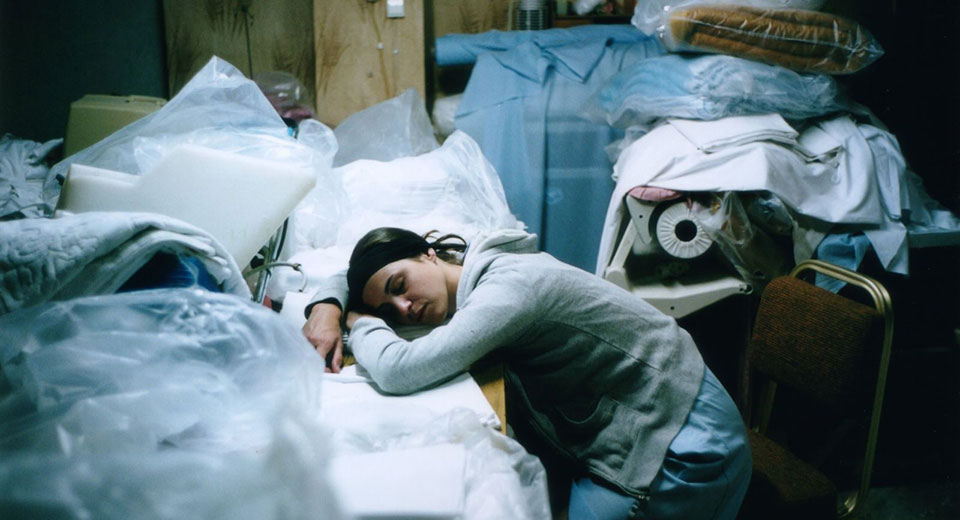 A man in a suit steals a cassette tape from an overturned car with the dead bodies still in it; a hotel maid pantomimes being beaten; a middle-aged bureaucrat steps out of his car and examines it from the front, as though there's something wrong with it, then the back, as though to see if someone is watching him. Thus are we introduced to Kinetta’s three protagonists, about whom we will learn little beyond their coinciding interests in violence: photographing the results, suffering it, and directing sadistic preludes. They have jobs, eat food, and occasionally pretend to fight, strangle one another, and die.

The often shaky handheld camera observes this unlikely trio as they go about their lonely daily routines, watching them quietly fail to connect with one another and, seemingly, reality. The hotel rooms, go-carts, sex workers and choreographed scenes they interact with represent mere approximations of life, glancing contacts echoing with alienation. Against a beautiful but listless seaside backdrop, a bizarre ménage à trois unfolds in halts, bandages, and awkward stops. At times Kinetta seems to be about the enveloping emptiness of fantasy enacted in repetition, or perhaps the rending violence inherent in relationships formed in desperate circumstances. Maybe it's about the inscrutability of the human heart, against the painful, bland absurdity of day-to-day life. It could also be about cool, surreal setups peopled with interestingly unattractive people.

There is also: a low-budget fashion show in a near-empty cafeteria; fantastic Greek pop songs; depressing architecture; and much more. Yorgos Lanthimos's debut solo feature has intimations of his ongoing preoccupations and stylistic signposts in ample evidence—a must-see for completists that stands on its own merits and is, occasionally, darkly hilarious.

Kinetta runs at the Museum of the Moving Image through October 27 and shows as a double feature with Dogtooth at 6:00 pm Saturday, and Alps at 6:00 pm Sunday.