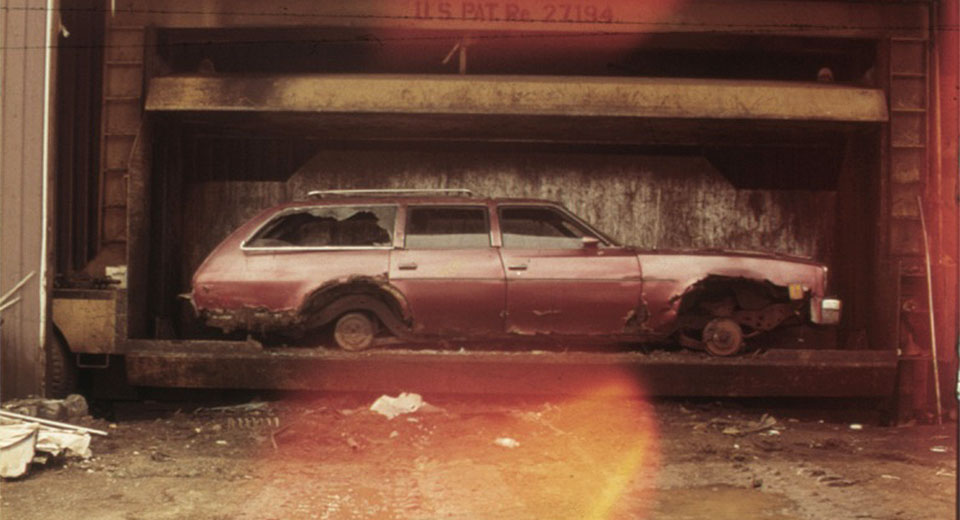 The three car-crushing films by Kevin Jerome Everson, currently featured in a gallery exhibition at Andrew Kreps in Chelsea, might be mistaken for a tribute to John Chamberlain, the artist known for his sculptures crafted from salvaged car parts. The relationship to sculpture is apropos for Everson, who has trained and continues to work in the form, but his films relate these scenes of cars being systematically broken down to so much more.

Seamlessly merging personal experience with researched subjects, primarily focused on the African-American working class, Everson’s films are indelible representations that offer a perspective on America too rarely seen in the canon of experimental cinema, let alone in an art gallery setting. But as Michael Sicinski observes in an in-depth Cinema Scope piece about Everson’s 8-hour Park Lane (2015), an epic document capturing a full workday in a factory producing bowling-alley parts, these films are not to be considered as documentaries, nor as unmediated perspectives on quotidian scenes, as critics and curators have occasionally done. All of Everson’s films, no matter how minimal, have an element of construction that blends creative fictional elements with photographic realism.

Everson’s work relates as much to a visual arts practice, using material for expressive ends, as it does to filmmaking. The direct connection of his moving-image work to the traditional “fine arts,” painting and especially sculpture, is owing to his visual arts training (at the University of Akron, and Ohio University), a background that makes him as attentive to material, process, and procedure as to uniquely filmic considerations such as camera placement, sound, and editing.

At Kreps, each of the films, Chevelle (2011), Century (2012), and Regal (2015), refers to a car model that had parts manufactured in Everson’s hometown of Mansfield, Ohio, where Everson himself worked on a factory line (washing machines). The visceral scenes of car deconstruction—a different process of destruction than the violent car wrecks depicted in highway safety movies, many of which were also produced in Mansfield—encourages all kinds of associations, some inevitably topical, related to Rust Belt America, labor politics, and outmoded industry, but also conjures the precarious cycle on which many a working and creative life is predicated.

In a separate gallery, a pair of 16mm films, Rough and Unequal (2017), are installed across from each other, projected from video at a large, immersive scale. Here Everson captures the waxing and waning of the moon, as seen from the observatory at the University of Virginia, where he currently teaches. The image of the moon takes up the entire frame, resulting in an abstract, familiarly lunar surface that gradually shifts in tone. The juxtaposition between the celestial and the utterly earthbound roaring of machines in the neighboring galleries brings a striking perspective, calling attention to the limited lifespan of all human endeavors.