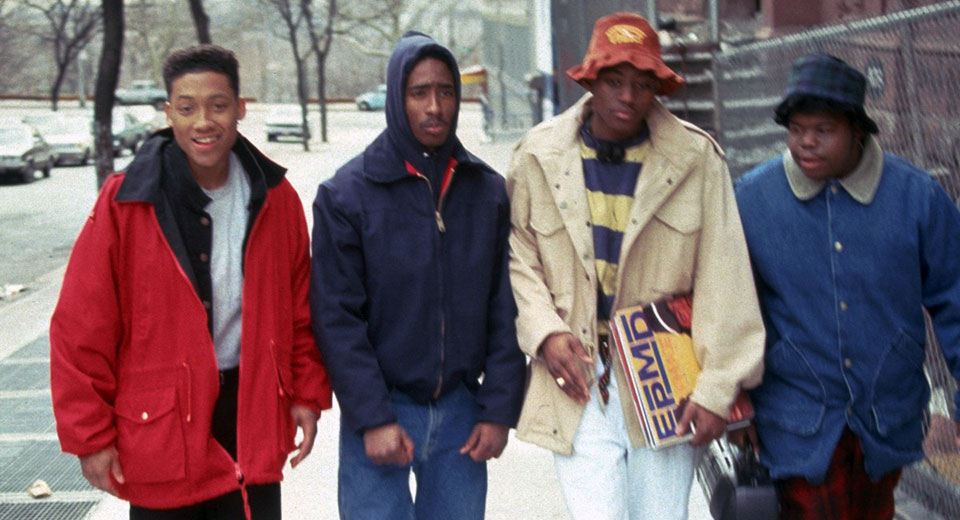 Ernest R. Dickerson’s directorial debut Juice has a neo-noir look and a surplus of documentary detail. It shares the vitality of the early 90s New York hip hop culture it documents, from turntable gear worship to sneaker fetishism. And aided by Tupac Shakur’s searing performance, Juice captures the traumatic and anxious roots of American gangsterism better than just about any other entry in the evergreen genre.

The four friends at the center of the film spend most of their time avoiding school, the police and rival crews. Raheem (Khalil Kain) the self-appointed leader, is struggling to make things work with the mother of his child; Steel (Jermaine Hopkins) being the chunky one, naturally offers comic relief; the volatile Bishop (Shakur) craves “juice,” a combination of notoriety and street cred; and Q (Omar Epps) hopes to make it past the local market with his turntable skills. As they enter the no-man’s-land separating the teen years from adulthood, each must contemplate his relationship to the group. Their foursome has little in the way of clout, a fact which curdles inside of Bishop but matters less to Q, who’s more focused on a DJ competition than petty crimes.

After needlessly shooting a shopkeeper during a robbery, Shakur goes full Richard Widmark and the movie takes a turn from coming-of-age docudrama to psychological thriller. Raheem attempts to confiscate the group’s gun from Bishop after the shopkeeper’s murder, but he refuses to surrender the only thing that’s ever made him feel powerful. In the resulting scuffle Bishop shoots and kills Raheem, while Q and Steel maintain silence out of loyalty and self-preservation. Bishop’s callousness emerges the moment he first pulls the trigger, which offers release from the boundless self-loathing formed in response to an environment (urban America) set on his degradation. Thereafter he becomes a well-motivated pulp villain, scheming against his friends and killing all who cross him. Keeping the film together Dickerson holds in tight balance Shakur’s expressionist melodrama and the real-deal backdrop of life in Harlem.