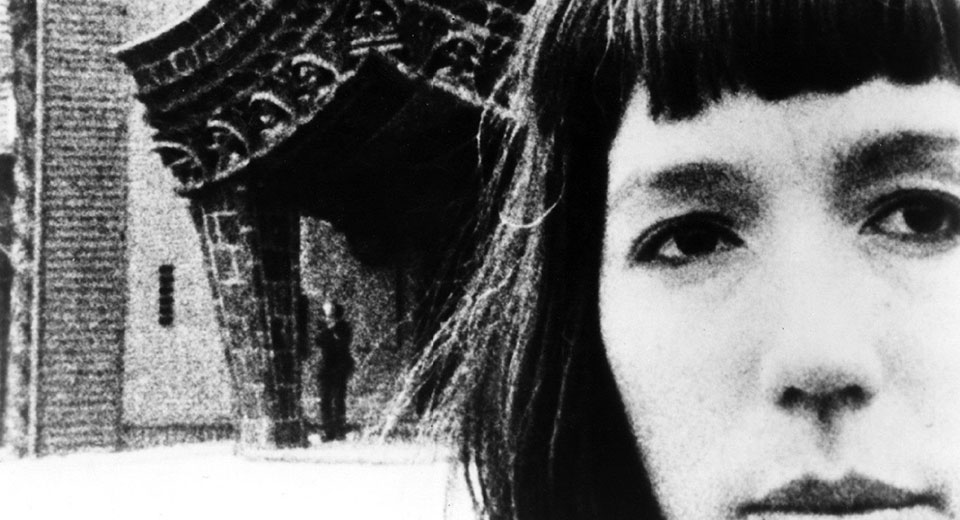 Widely celebrated as a dancer and choreographer for her distinct lexicon of movement and her role as a co-founder of the influential Judson Dance Theater, Yvonne Rainer turned to feature filmmaking in the early 1970s, after several years of incorporating her 16mm shorts in dances and performances. Her fourth feature, Journeys From Berlin/1971 (1980) is a dense meditation on radicalism, morality, and the contradictions between public, political, and private life. The film weaves together four main narratives: the reading of excerpts from Rainer’s adolescent diary, scrolling text that provides a history of the repression of dissidents in postwar Germany, a dialogue between an intellectual New York couple as they discuss Ulrike Meinhof and other revolutionaries, and the psychoanalysis sessions of a woman, played by the film theorist, translator, and editor Annette Michelson.

These narratives braid in ways that are impossible to parse in a single viewing. The interweaving is sometimes in subject matter, sometimes in visual echoes—and, as in her earlier films, fiction blends with autobiography. Some biographical background about Rainer, not provided in the film, is essential to understanding the choices of subject matter. The couple (voiced by critic Amy Taubin and artist Vito Acconci) engages in a discussion about revolutionaries while preparing dinner. Quoting activists like Emma Goldman and Alexander Berkman, their narrative thread mirrors the reading of Rainer’s jejune but earnest diary. Though this isn’t made explicit in the film, the diary was written when a 16-year-old Rainer was first reading the writings of these radicals—raised by an anarchist father, she was made “aware of the history of American anarchism from Berkman to Sacco and Vanzetti. These were household names when I was growing up.” Rainer felt drawn to this period of her nascent political life while living in West Berlin as an artist-in-residence from 1976-77. For Rainer, Journeys From Berlin/1971 was an “attempt to push open that political door again.”

While this fact reveals one clue behind these disparate narratives, it is by no means a skeleton key to the film. The puzzle is the point. The disorienting form, the dense layering and echoing of narrative threads, reflects the tensions on display: the contradictions and unanswered questions of morality, terrorism, activism, power, and personal struggle. But for all of its heaviness, the film’s sly humor and self-awareness should not go unnoticed. Michelson’s character delivers sardonic anecdotes and wry non-sequiturs throughout, and toward the end of the film’s unrelenting presentation of moral quandaries, Taubin’s character states: “I just now made up my mind, I’m going to stop trying to become a better person.”