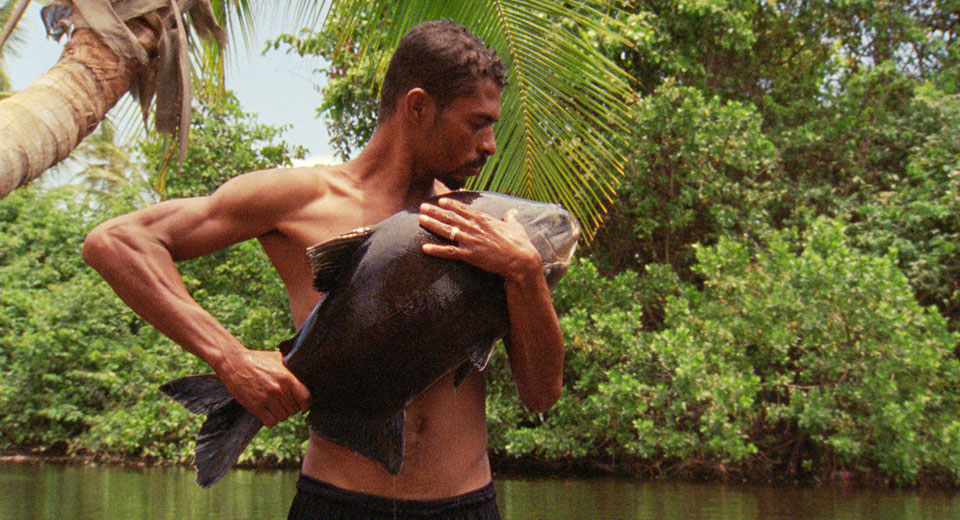 BAM’s 2017 Migrating Forms series continues tonight with a program of single-channel videos by Jonathas de Andrade . Spanning a period of six years, and combining multiple media and production techniques—including 16mm and super-8 film, found sound and footage, and stop motion animation—de Andrade’s images trace the troublesome evolution of his native Brazil’s national narrative and identity in a way that is playful yet contemplative, investigative yet kind. For all its criticality and obvious socioeconomic themes, the work nonetheless maintains a spirit of childlike curiosity—without the strenuous condescension and hostility from which so many overtly political works suffer. Postcolonial critique is a tightrope, and De Andrade walks it well.

De Andrade’s most recent work, O Peixe (The Fish), arguably the centerpiece of the screening, is a mesmerizing movie in which coastal fishermen perform a bizarrely erotic ritual killing which consists of embracing their catch to the point of suffocation. That the film is shot in the style of an ethnographic documentary further complicates the narrative, which is fictional… yet symbolic. And therefore also somehow true. Other highlights include O Levante (The Uprising), in which de Andrade documents and reflects upon the process of producing his rapidly gentrifying hometown’s first-ever horse-drawn cart race (!?), and O Caseiro (The Housekeeper): a deeply beautiful and disturbing split-screen depiction of the contrasting daily routines of sociologist Gilberto Freyre in 1959 (author of The Masters and the Slaves, originator of Lusotropicalism, proponent of racial integration) and Cristóvão, an ordinary housekeeper in 2016.

The cumulative effect of these works is surprisingly dramatic, especially considering the context for which they were created. Originally designed as single-channel video installations for galleries and museums, De Andrade’s work clearly benefits from theatrical screening in linear succession. When presented back-to-back in the quiet confines of a traditional movie theater, the disparate sequences inform and blend into one another to achieve a thoroughly narrative effect. I suppose what I’m getting at is that De Andrade, in addition to being a radical and innovative conceptual artist, also happens to be a damn fine storyteller.