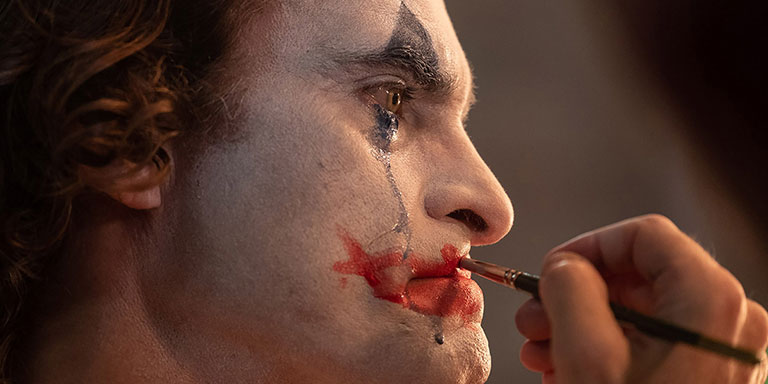 Todd Phillips's Joker is a joyless film with the wit and emotional intelligence of a school shooter manifesto. Don’t confuse this with moralistic hand-wringing about the possibility of the film stoking actual violence: as one of my colleagues pointed out, its greatest threat is inevitably inspiring shitty Halloween costumes. A committed performance by Joaquin Phoenix, whose disciplined, graceful embodiment of the role transcends the vapid script, and fine production values across the board redeem it somewhat. But with a fundamentally flawed concept, juvenile worldview, and lines that feel ripped from Hot Topic t-shirt slogans (“i just hope my death makes more cents [sic] than my life,” the frustrated clown scribbles in his journal), Joker is a rag-huffing, Code Red Mountain Dew-chugging, NoFapping hot mess of bad ideas.

Set in 1981 Gotham, stylized as an all-but-in-name New York City, Joker introduces Arthur Fleck as a heavily medicated clown-for-hire with a neurological compulsive laughing disorder. After he’s jumped by teenagers during a sign-twirling gig, his skeezy co-worker impresses upon him that people are “animals” and hands him a gun. When it falls out of Fleck’s pants during a Patch Adams routine at the children’s hospital, Arthur’s thrown to the curb. Meanwhile he struggles with the deteriorating health of his mother (Frances Conroy), with whom he shares an apartment and spends evenings watching the Late Night show with Murray Franklin (Robert De Niro). Fleck idolizes Franklin and dreams of appearing on his show, much as he wants to capture the attention of his next door neighbor Sophie (Zazie Beetz), a single mother with disappointingly little else in the way of characterization. After someone records Fleck bombing his standup routine, the tape makes its way to Franklin, who mocks him on air. (Despite the film's admirable worldbuilding, the presence of consumer video in 1981 and its viral dissemination feels conspicuously anachronistic.)

Meanwhile, Fleck kills a group of Wall Street jerks harassing a woman on the subway, which inspires a populist uprising that encircles the wealthy Thomas Wayne, running for office on a platform of dismantling the social safety net. This policy hits Arthur when funding for his therapy is cut. “They don’t give a shit about people like you,” Arthur’s therapist, a black woman, tells him, “And they really don’t give a shit about people like me.” Along with a half-hearted acknowledgment of the way mental illness is stigmatized — while also suggesting within the larger context that that the mentally ill, left unattended by society, are latent supervillains — the dialog is a characteristically vague nod to racial and gender descrimination merely for the sake of blinkering significance. At the same time, the anti-Wayne protesters are uniformly portrayed as criminal delinquents — “KILL THE RICH: A NEW MOVEMENT?” one of the film’s newspaper headlines reads — naively projecting their agenda onto a truly anarchic, nihilistic, equal-opportunity hater.

On some level, the basic idea of portraying the Joker as a blackpilled loser is sort of funny. I'm reminded of artist Takeshi Murata's 2010 3D animated video "I, Popeye," in which the classic character is recast as an aging hipster who becomes despondent after losing his house and his job at the dispeptic spinach factory. He visits the graves of his late wife and child, Olive Oyl and Swee’Pea, and spends a moment of compassionate reflection at the hospital bedside of his comatose adversary, Bluto. Murata’s Popeye has nothing to live for, no one to share his life with, and nothing to even fight against. In a moment of ecstatic, existential violence, Popeye destroys his apartment before hanging himself, only to be reborn in a glitched-out digital psychedelic world where he speeds off on a Mario Kart 64-styled path toward nirvana. In six minutes, the fundamentally ironic video manages to stir genuine pathos while functioning as a subversive commentary on how corporate culture and protracted copyright terms strangle the life and imagination out of popular characters.

As a misguided, conglomerate-sanctioned attempt at allowing a filmmaker to reimagine its signature villain, Joker lacks the multitudes of Murata's project, to say nothing of the nuance that Alan Moore brought to his own tragic, psychological portrayal of the character in 1988’s essential one-shot The Killing Joke. Instead, it’s an overly obvious, watered-down, ersatz mashup of Taxi Driver and The King of Comedy with cringey rallying-cry dialog such as “What do you get when you cross a mentally ill loner with a society who abandons him and treats him like trash?” Its only inspired touch is soundtracking Fleck's full-makeup Joker coming out to disgraced arena rock anthem “Rock and Roll Part 2” by Gary Glitter, a well-known convicted child rapist. The association, which I will assume in good faith is intentional, is appropriately gross.

After all, Phillips is no stranger to transgression. He spent his student years filming GG Allin, clerked at Kim’s Video, established the New York Underground Film Festival, and directed the notoriously unaired HBO documentary Frat House. Even as he ostensibly settled into the role of a studio filmmaker, he managed to direct some of the most legitimately hilarious, era-defining comedies of the aughts. Alas, Joker is neither edgy, funny, nor threatening — a deflated whoopee cushion. In the words of my friend who dressed as Austin Powers in Dark Knight Joker makeup one cursed Halloween: Why so serious, baby?

Joker was reviewed at the 2019 Toronto International Film Festival and also plays at the New York Film Festival October 2. It opens nationwide October 4.