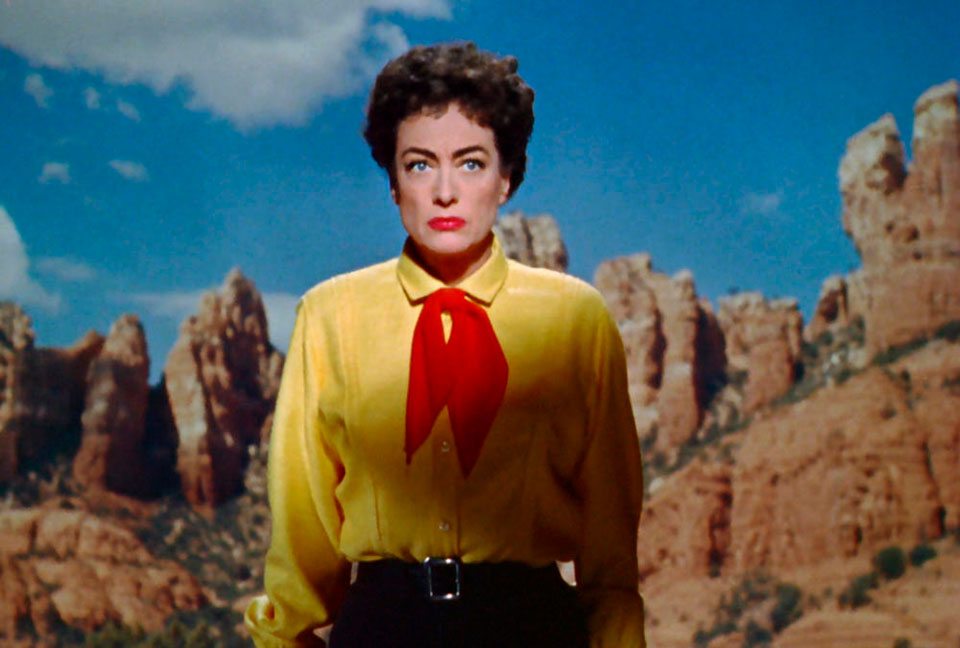 Joan Crawford is a self-made woman in the waning days of the West, having spent five long years selling herself so she could build her own saloon near the site of a soon-to-be-built train depot. Her employees are baffled, saying “I never thought I’d end my years working for a woman,” and “I never saw a woman who was more man.” They treat the saloon like a monument to her shame, while she herself beams with pride at “every plank and nail.”

If her barmen tolerate her oddness, her fellow townspeople are a different matter altogether, especially a woman named Emma (Mercedes McCambridge) who is bursting with murderous vengeance. Crawford’s foes are landowners and cattle ranchers who own everything else nearby and want what she has too. They drive their fellow citizens into a fury by talking about the changes the railroad will bring: Easterners, dirt farmers and strangers will come along and squeeze them all “between barbed wire and fence posts.” There is no mention in Johnny Guitar of savages, and the silver mines have all given out, but people can be worked into angry mobs over modern threats. Nicholas Ray was filming his actors forcing one another to name names and practicing summary justice with nooses and clubs while McCarthy and the HUAC held forth, and he would often have to stop on his way to the set in the morning to vomit from stress. Johnny Guitar is screening as part of Anthology’s “Written” by Philip Yordan series, and the films Yordan wrote—or just put his name to on behalf of blacklisted colleagues, in this case Ben Maddow—capture the paranoia and hopelessness of the era.

Sterling Hayden plays the titular role, a holy fool with a bemused smirk who’s been hired to strum his guitar in Crawford’s joint but who is actually a famous gunslinger. (The actor was supposedly incapable of riding a horse, shooting a gun or playing the guitar when filming began.) He gets to play the hero by coming to Crawford’s rescue, but he’s also her hired man, and she’s the one who knows the best hiding places. Crawford is wearing a ridiculous, tulle-soaked white gown when it comes time to make the first of many escapes. Hayden complains that “getting away in that dress is like carrying a lantern,” and right then it catches fire. Crawford rips it off and grabs a miner’s jeans, shirt and boots so she can run away more comfortably. There are more costume changes to come, but she never puts on another dress.