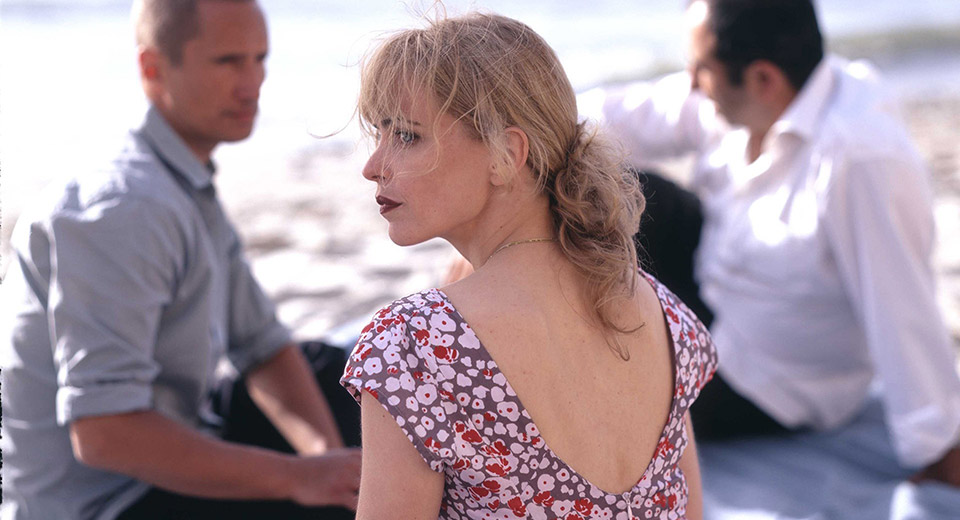 Christian Petzold has described his ninth feature, Jerichow (2008), as a remake of The Postman Always Rings Twice, though he departs significantly from his source, as Fassbinder does from All that Heaven Allows in Ali: Fear Eats the Soul. Like Fassbinder, Petzold knows that it's just as impossible to continue working in the pure idiom of any of the classic genres as it is to entirely leave behind their semantic structures. Genre's ghost is inescapable: "I make films in the cemetery of genre cinema, from the remainders that are still there for the taking."

Jerichow has the same narrative skeleton as its model: A man falls in love with his employer's wife, and together they plot to kill her husband and to take over his business. Whereas the 1981 remake (starring Jack Nicholson and Jessica Lange) cuts the original story short by eliminating the protagonist's conviction and death sentence, Jerichow ends even earlier, before any criminal investigation is so much as hinted at. This allows Petzold to focus on the context that produced these characters and their relations in the first place, namely post-reunification Germany. This is the theme of all of Petzold's films, each of which explores different aspects of Germany's new national identity.

In this new Germany, everyone is a ghost, a drifter. Mobility and flexibility are the keys to finding a place, however fleeting, in the new labor market. The characters in these films have no home, either because they are immigrants, their work entails constant travel, or they are on the run from the law. Jerichow's protagonist, Thomas, has returned from Afghanistan only to move into his dead mother's valueless house where he sleeps on the floor. He has returned both to his fatherland and to his childhood home but still remains a guest, a status emphasized by his employment by an immigrant, Ali, who emigrated from Turkey as a child and longs to move back. Ali's wife, Laura, dreams of a kind of return as well: she married Ali to free herself of her €142,000 debt, hoping that the abuse and humiliation she'd have to submit to would be only temporary.

If "home" is the object of desire in Petzold's films, then the transitional spaces of global capitalism are their environment. For Petzold, cinema's chief historical function has been to provide a mythos for that fundamental site of modernity, the road; but now that the cities have been stretched into homogeneous membranes that cover the entire globe, "this mythos is in the process of dissolution: people are no longer on the road in order to find themselves, but because they cannot find an exit, because there are no more cities." Thomas's job as deliveryman for Ali's chain of suburban kebab stands, Laura's marriage, and Ali's stay in Germany are all temporary situations that unfold in the non-places of an all-consuming megalopolis: roads, parking lots, rest stops, supermarkets, airports. Contemporary life, shaped in all of its aspects by neoliberal imperatives, takes place primarily in these "mobile immobilities," these transit zones that "expand in a metastatic way," like a cancer.

A job that involves constant driving can offer a life on the move, but it can only do so in bad faith. The road becomes a treadmill, the scenery an empty distraction. The only freedom of the road is the freedom to swerve into a ditch, a gesture that the characters in Jerichow discover to be lacking in glamour.