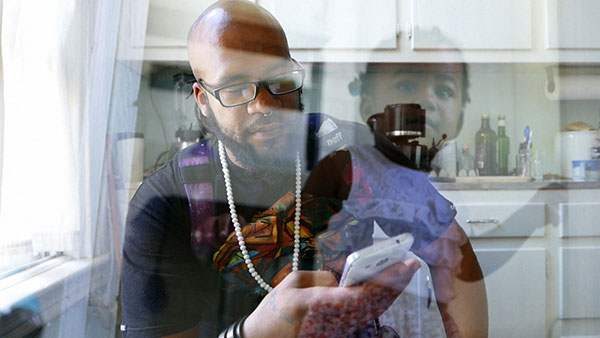 Screen Slate is pleased to screen James N. Kienitz Wilkins's Common Carrier (2017, 78 min) co-presented by The Brooklyn Rail. The artist will appear in live conversation with Gina Telaroli & Dan Sullivan, both writers, curators, and co-editors of the Rail's film section.

A fervent hybrid of autofiction and documentary, Common Carrier tracks the filmmaker's network of artists and friends amid the haywire summer months of 2016. As Wilkins describes, Common Carrier "weaves scripted performances by real people playing versions of themselves with intimate conversations about art making, labor, technology, and life. The layered images and sounds—inspired to an extent by my interest in visual techniques developed in early Modernist art—contrast with the technologies and unavoidable airwaves of the 21st century to become what I consider a fair use cinematic 'mixtape.' It was my goal to reflect our multifaceted contemporary world where there is no one right way to look or listen: we are perpetually barraged by a sea of information, histories, and the promises of absolute connection, while remaining fundamentally alone."

Following the broadcast, the stream will be freely available to view on the Screen Slate Twitch channel for one week. Subsequently it will be accessible along with other past Stream Slate programs with artists including Cecelia Condit, Ken Jacobs, Ellie Ga, Frank Heath, Simon Liu, Cory Arcangel, and Laboratorio Experimental de Cine for Screen Slate Patreon members.

James N. Kienitz Wilkins is a filmmaker and artist based in Brooklyn. His work has screened at the film festivals and venues including the New York Film Festival, Toronto IFF, Locarno IFF, Rotterdam iFF, Migrating Forms, MoMA PS1, Tate Modern, and beyond. In 2016, he was awarded the Kazuko Trust Award presented by the Film Society of Lincoln Center. In 2017, he was included in the Whitney Biennial and a retrospective of his work was showcased at RIDM (Montreal).