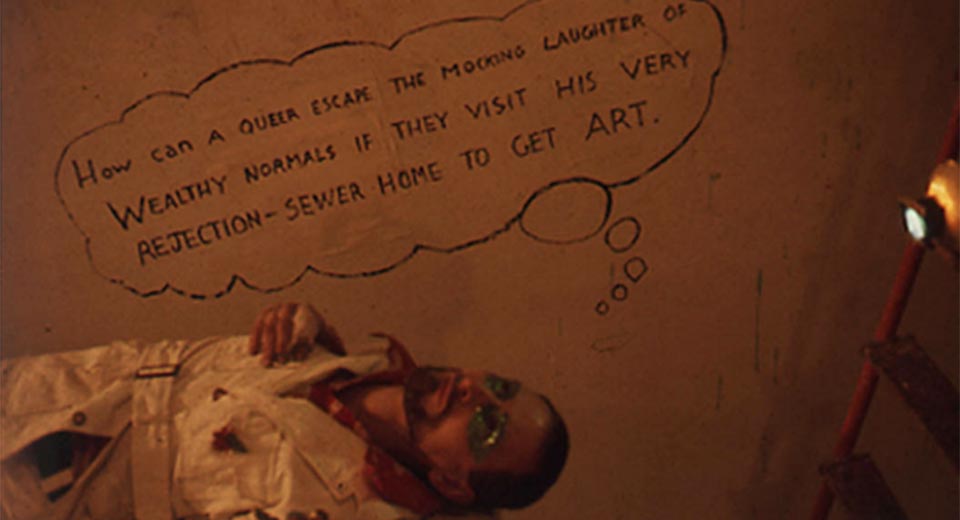 Jack Smith: Art Crust of Spiritual Oasis at Artists Space is billed as the first New York institutional retrospective of the artist's work in nearly two decades, since the 1997 Flaming Creature exhibit at PS1. In the interim years, Smith's saleable objects (er, "art crust") have been acquired by Gladstone Gallery after a long legal bout, while the remainder of his estate has ended up at NYU's Fales Library. His work has since shown up in periodic Gladstone shows or museum surveys, but this marks the most sustained effort to document his itinerant years and present the fruits of unfinished latter works like Sinbad in the Rented World and I Danced with a Penguin.

Though he never completed a film after Flaming Creatures, Smith's work was forever guided by the fervor he saw in "secret-flix," a cinematic genre of his own design that referred to anything with the appropriate levels of athleticism, anarchism, and heinousness: stars Judy Canova and Maria Montez; Busby Berkeley and the Marx Brothers; Universal monster movies; and especially the haute-melodrama Orientalism of Josef von Sternberg. Later performances saw him screening reels of his works-in-progress soundtracked to exotica, bolstered by feverish readings and other revelry by Smith and company. He was still in the midst of designing a permanent set for Sinbad in his Lower East Side apartment before his death of AIDS-related illness in 1989.

Smith's performances and writings were notably decorated by his fantastical argot, reminiscent of Douglas Fairbanks adventure features—Manhattan becomes "rental island," Jonas Mekas and other promotion-happy nemeses become "Uncle Fishhook," and so on. Among the centerpieces of the show are his long, characteristically fanciful diatribes against musealization and opportunism, one in every room, presented as ominous exhibition loop at the entrance and via 1974 German TV broadcast in the basement. No President, his mondo-demagoguery tribute to Wendell Willkie, plays in the back, across from a "Crag Ogress" costume designed by Smith for Mario Montez.

In conjunction with the exhibit, Artists Space and Metrograph will present a thorough eight-program series of Smith films, September 8 through 10. It includes his tour-de-force Normal Love plus outtakes, introduced by Richard Foreman; a program of performance documents introduced by Joan Jonas; and Smith's collaborations with Ken Jacobs followed by the newly-restored Chumlum. (Also note: today is the final day to catch Rice's The Queen of Sheba Meets the Atom Man at Anthology, feat. Smith.) The program culminates with the premiere of a feature-length 1980 Smith performance at the University of Colorado, an exquisitely chaotic evening that resembles the rubble animism of Stuart Sherman or Ralston Farina—part failed shaman, part failed showman. A great cap to a great show, which closes its doors on September 9, the final exhibit at Artists Space's 55 Walker location.