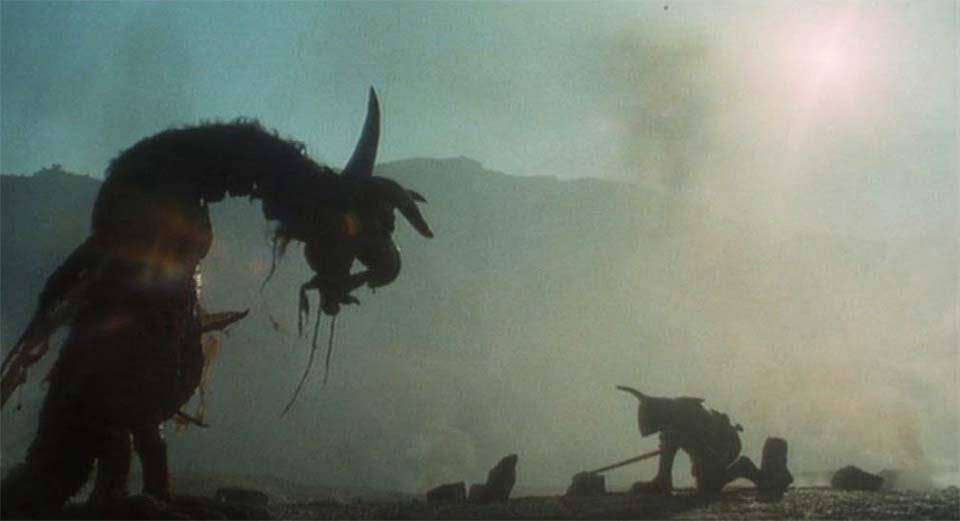 So unheralded is Terry Gilliam’s first solo joint, Jabberwocky (1977), that it’s pushed to the second page of search results if you google its title. In the popular imagination at least, Gilliam’s adaptation has failed to catch up to its source material, Lewis Carroll’s 1871 poem of the same name. All due respect to Carroll, but this is unjust. Gilliam’s Jabberwocky is one of his best films, a charming and cynical fantasy warped by his trademark wide-angle lenses and canted frames. It’s more biting than Fear and Loathing in Las Vegas (1998) and funnier than Brazil (1985). The film’s silly, cynical gags form a perfect tonal bridge between his work with Monty Python and the dystopian films for which he’s best known.

Disowned by his artisan father for fastidious tendencies, Dennis leaves his medieval backwater in search of business success in the big city. There he finds castle guards pissing on the starving peasantry when a winged monster, the Jabberwock, isn’t feasting on them. All Dennis wants is to earn enough coin to marry his indifferent, homely sweetheart back home, but instead he’s embroiled in one misadventure after another, typically involving the hilariously mangled bodies of valiant knights. Dennis’s fixation on improving production efficiency causes only death and dismemberment, but he remains a panglossian believer in the beauty of commerce.

His travails bring him ever closer to the monster, a fantastically grotesque creation more resembling a child’s sketch than state-of-the-art creature effects. Gilliam strikes a perfect balance pitting the cardboard artifice of his special effects against the blunt reality of genuine medieval castles and gallons of excreta. It’s never too cute or twee in its antics. Each goofy sight gag has enough stink on it to reinforce the wretchedness of Gilliam’s world. After the Jabberwok feeds, it drops the human carcasses to the ground, each an intact head attached to a bloody skeleton. More comedies should have this much fake blood. In terms of horrific artifice, Jabberwocky perversely resembles two late Robert Bresson masterpieces, Lancelot du Lac (1974) and L’argent (1983).