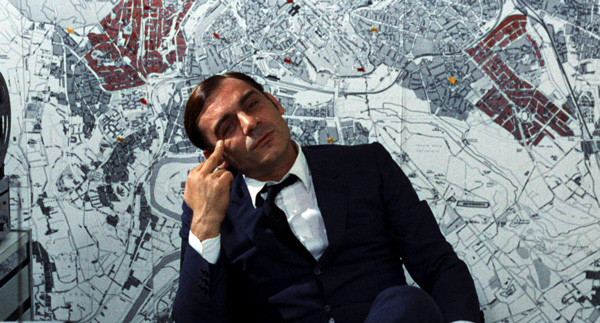 A swaggering Roman homicide chief (Gian Maria Volonté) murders his mistress (Florinda Bolkan) and then goes directly to a party his colleagues are throwing for him, taking a couple of bottles of her champagne along with him. The party is to celebrate his promotion to Rome’s “head of security”, and he accepts his new post with a rousing speech, which is shot from below eye level with the chief looking up and over the camera’s point of view and towards his rapt listeners, similar visually to Mussolini’s filmed addresses. He shouts: “Until yesterday I was busy with murders, with success. There is a precise reason why they have chosen me at this time to lead the security department. It is because the political and non-political crimes are by now nearly indistinguishable. Underneath every criminal hides a subversive person. Underneath every subversive individual there hides a criminal. Repression is our vaccine. Repression is civilization.”

Freud also said that repression is civilization, and the chief’s psychic underdevelopment is analogous to his abuse of power. If the police bureau’s halls are where he excels at the abuse and oppression of his fellow citizens (the film quotes Kafka in epilogue), then his mistress’s bedroom is where he plays at being the dictator but ends up the foolish child. She just wanted to have some illicit fun with a man in uniform, but the chief isn’t playing the same game. At one point she tells him “You’re like a child, more than any other man I’ve known.” Later she doesn’t mince words: “You make love like a child. You are sexually incompetent.”

After he kills her, the chief deliberately leaves various clues to implicate himself at the scene of the crime: a footprint in blood, fingerprints, a thread from his bright blue tie. His colleagues fail to see the murderer standing right beside them, and he must feed them increasingly obvious clues. At one point he records himself explaining, “I left clues, not to mislead, but to test myself being above suspicion.” Indeed, the police around him are chillingly unable to imagine the possibility that a respected person in a position of power could have committed the crime, even as the evidence mounts.

Elio Petri was an authentically radical filmmaker who was disgusted with the security apparatus, and his chief is a full blown fascist and a puerile jerk, but without being a crude caricature. He and his colleagues constantly breach the basic tenets of democracy. Petri also points at something dark beyond these individuals, even beyond the police as an institution, namely the extreme difficulty in practicing any justice at all given human stupidity. There is also a prescient nod at the use of technology in policing. A great hall of records stores the names of all the dangerous communists, anarchists, Maoists, leftist-Catholics, etc., but the records are slowly being computerized. The police can simply ask the computer what dissidents live near where a crime has been committed and the police will have their culprit. When the computer is demonstrated for the chief, he says, “The revolution from America has arrived!”