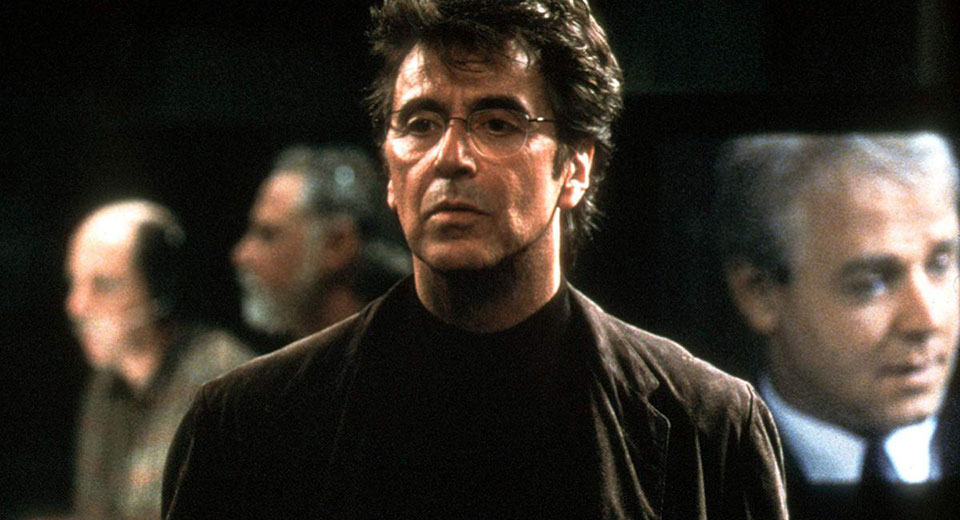 Michael Mann is associated with clamoring action, speed, tough talk, and men who don’t get attached to anything they can’t walk out on in thirty seconds flat if they feel the heat around the corner. But The Insider is a film that shows his softer side, illustrating Mann’s capacity for empathy, his elegant abstractions, his sentimentality. Rather than being exceptional, this film should be the lens through which his entire filmography is viewed, for these are the qualities that make Mann Mann, and that make Mann’s men.

The Insider is an intimate film, so close to its central characters that we can see the smudges on their glasses, the stubble on their cheeks. It feels close to Mann somehow, and hearing him talk about early experiences collecting footage during the Paris student uprisings of the late 60s, or his visit to Folsom prison in the 70s to film his first feature, The Jericho Mile, one could connect The Insider’s central drive—a compulsion by two men to bring a story to public attention—to Mann’s own compulsion to bring his stories to the big screen, when he seems more the type to sit alone in dark jazz clubs.

The specifics of The Insider’s plot, inspired by the real-life tobacco industry whistle-blower Jeffrey Wigand (Russell Crowe), and the real-life 60 Minutes producer Lowell Bergman (Al Pacino) who pushed his story, are secondary to its composition and general themes. This is Mann’s opera about the insidiousness of corporate America, on the cusp of a millennium that has only seen the unchecked growth of its influence.

Wigand/Crowe and Bergman/Pacino are one of Mann’s great couplings. The film’s first shot, a stark abstraction of fabric, close to the lens, shuddering with movement, later revealed to be a blindfold tied around Bergman’s eyes, immediately establishes a mood of isolation and alienation. Later, the introduction of Wigand’s character shows him packing up his desk while a birthday party carries on brightly in the background. The insider is more of an outsider, cut off from society, forced to withdraw into himself. Over the course of the film these two outcasts will find each other. Ultimately The Insider is a relationship film, about how men relate to one another in a crisis—whether with fury, embarrassment, or reluctant dependency. The plight of the American male is clearly Mann’s focus, but his best characters exhibit an emotional tenderness and vulnerability that is unusual in the context of genre staples like bank heists and ricocheting gunfire. The relative quietude of The Insider gives space to appreciate Mann’s more cerebral complexities.