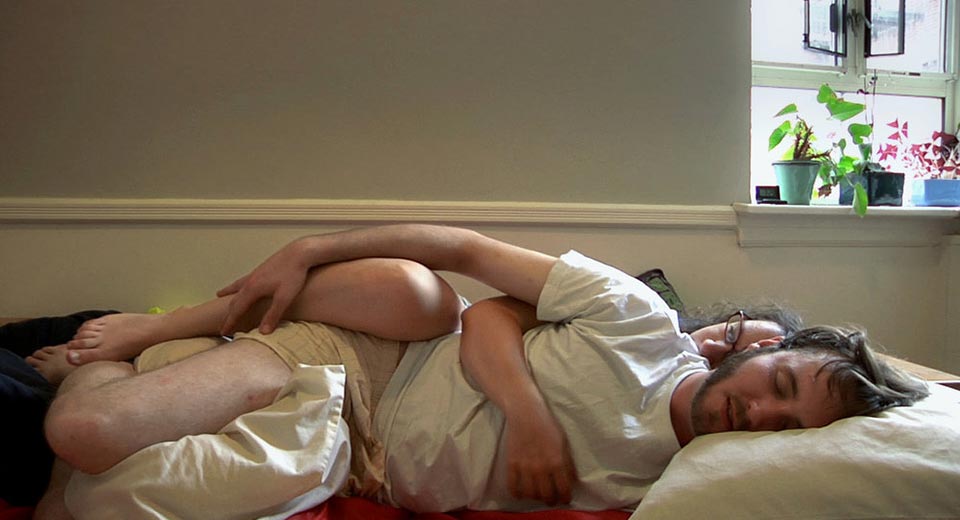 Joanna Arnow’s i hate myself :) lays its cards on the table right up front with its title: the self-deprecation paired with the smiley emoticon speak to millennial discomfort—being open with your feelings, but only within a layer of irony. Arnow deftly explores the intersection of sarcasm and sincerity in this confrontational documentary of Arnow’s own relationship with a man who is clearly not right for her.

James, Arnow’s quasi-boyfriend (he seems commitment-averse, to put it lightly), is an alcoholic poet who holds court over a Harlem open mic night in a number of incredibly awkward scenes. He is, in the parlance of 2017, an alt-right troll, using racial slurs in Harlem, asking Arnow if she had ever been raped (in response to her request that he not call her “babe”), and smirkingly spewing anti-semitic remarks while Arnow, a Jewish woman, records him. Arnow admits she feels confined with the people she knows, and is invested in her relationship with James because she wants something different. Arnow’s friends, as we see them in the film, are understandably baffled by her relationship with James; her editor/friend Max chastises her for performing traditional gender roles while editing her film in the nude. The everyday hypocrisies of Arnow and her friends, even her family, are laid bare; when was the last time any of us had to face our issues, or our loved ones’ issues, so directly? Arnow identifies her flaws with laser precision, and makes sure the audience does, too.

The film is also a pointed commentary on documentary filmmaking itself; in the very first scene, Arnow speaks with her parents about their thoughts on her movie, and her father refers to himself as “an actor—or a prop—in your movie.” James also brings up to Joanna how he feels like subject matter to her, even as she pours out her innermost feelings to him. Arnow is both documenting her life as it happens, and also interfering in her own film about herself - she is both character and creator.

i hate myself :) was made in 2013, and is finally getting its overdue New York theatrical premiere (along with her more recent short, Bad at Dancing) at Anthology 4 years later. It’s inevitable that Arnow’s work gets compared to Lena Dunham’s; both women are willing to bare their souls and their bodies in front of the camera in search of truth. And to some extent, both women are playing themselves—Dunham’s acting might be informed by her real life, but to what extent is Arnow portraying her life with an inevitably personal perspective? i hate myself :) is confrontational and empathetic, cringe-inducing and heart-breaking, political and deeply personal.