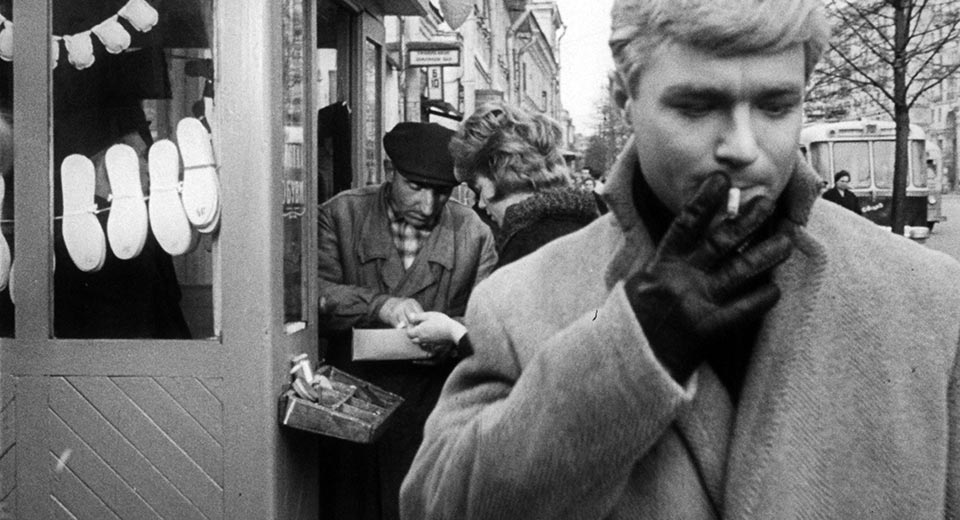 Filled with sweeping crane shots, whip-pans, and headlong traveling shots through throngs of people, Marlen Khutsiev’s first feature I Am Twenty (1965) is an obvious tribute to director Mikhail Kalatozov's The Cranes Are Flying. Both the visual character and the themes of I Am Twenty echo Kalatozov’s tale of a young couple torn apart by the Great Patriotic War. Khutsiev’s film might jerk fewer tears, but this has to do with the difference in period; Kalatozov’s wartime protagonists were the parents of Khutsiev’s “fatherless generation,” and war makes for tauter emotions than peace.

Moscow, 1962. The war’s patriotism is waning, self-sacrifice has given way to moral confusion. Back from the army, Sergei starts working at Moscow’s 11th Heating Plant and studying at the Polytechnic. With his inseparable friends Kolka and Slava, he dances to jazz at house parties and sweats at the steam baths. His biggest problem is where to move with his new sweetheart—staying at their parents’ would be lame, but his wages won’t pay the rent anywhere. Far more exciting than the movie’s plot are the views of Moscow’s daily pulse: electric buses at rush hour, newsstands mobbed by homebound workers, stray cats scuttling across glistening cobblestones in the hungover dawn.

How Nikita Khrushchev could have found I Am Twenty so unpatriotic he personally banned it is beyond me. Ennui might be a central theme, but so is progress. Moscow feels like a modern metropolis on a par with Paris: working class families have TVs, comrades from Ghana marvel at the advanced industrial plants, and a float depicting a space rocket atop a twelve-foot hammer and sickle glides through the May Day parade. Sure, some of the references to Soviet progress might seem ironic (a nuclear plant at the edge of a soccer field, workers gloating about the convenience of watching the demonstration on TV “like a soccer match” instead of actually attending it), and Sergei’s enumeration of the attributes of a “model Soviet citizen” (work, college, participation in social life, no criminal record) could be construed as tongue-in-cheek. When Sergei proposes a toast to potatoes, that earthy symbol of Russianness, he’s accused of “kvass patriotism,” i.e. fake. But he spiritedly defends his sincerity: “I take the Revolution seriously, the Internationale, the year 1937, the war, the soldiers, the fact that almost none of us have fathers—and potatoes.” When his father’s ghost addresses him with the words “I’m leaving the motherland to you, and I leave it with an absolutely clear conscience,” Sergei becomes the solemnly invested bearer of his nation’s future. Over images of Lenin’s tomb, he soliloquizes, “This all belongs to us, the only possible thing for us. And we’ll be faithful to it to the end.” Does it get more earnestly patriotic than this?