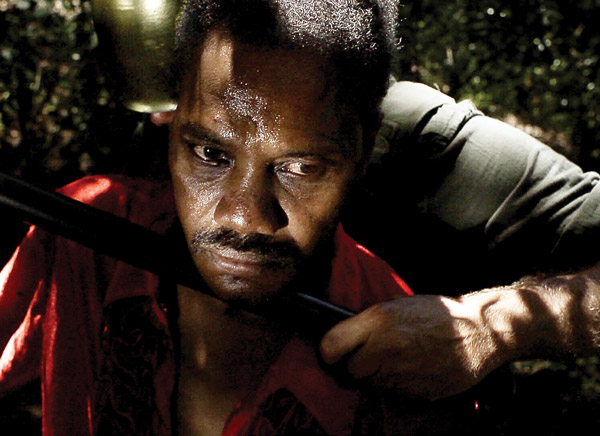 I think it’s good to have a film with the word money in the title. -Pedro Costa

Pedro Costa’s Horse Money opens, silently, with a montage of photos taken by Jacob Riis of slums, low ceilinged bars, packed-dirt alleys and their inhabitants. What will come after is quite specifically tied to a local narrative concerning the diaspora of contract workers from Cape Verde to the construction sites and shacks of Lisbon, and the turmoil and violence introduced to their lives by the 1974 Carnation Revolution, which led to the independence of Cape Verde from Portugal. And yet Riis’ images of New York in the 19th century are relevant to the work that Costa has created, which probes the history of a movement from one kind of grueling poverty to another. There is variation in the defining features, but bodies and minds continue on paths to ruin.

Ventura (played by a Cape Verdean immigrant of the same name, who also starred in Costas’ 2006 Colossal Youth) is inside of a shifting and unreliable narrative, tremulous and clad only in pajamas. Lisbon’s immigrant neighborhood of Fontainhas, which no longer exists, is recalled in sparse, monochromatic and proverbial terms, with Ventura descending through a cobbled archway, being locked behind an iron gate and traversing a dark corridor. He emerges from an elevator, a patient in a hospital, or perhaps a prison. Questions are asked of him, and his answers are contradictory: he is 19 years and 3 months old, a retired bricklayer. He is asked if he sleeps well, and replies, “a big black bird came and sat on my roof.” Men visit him in his hospital room, whispering to him. He tells them, “Nobody likes me. Not even the armed forces.” His nephew is among them, and answers, “We’ll keep on being severed by the machines. We’ve always lived and died this way.” He is told he must confess.

A personal history half-emerges involving unpaid wages, failed attempts at solidarity, a knife fight with 93 stitches for the victor and a military hospital. But these are the incidental and inevitable things; the hospital/prison and its doctors/soldiers have always been there for men like Ventura in both the colonial and postcolonial world. His life and its turmoil and sickness are one thing, the work of a soldier’s baton, or “the mold in the walls of our houses”, or a life spent “working ill, raising children”, carrying concrete sacks. He sings the anthem of his countrymen:

Ticket to Lisbon cost him his land

Cheap labor, shack in the dark.

Together, he and the others “built many buildings. Banks and schools.” A statue of a soldier asks him, “For what?” He thinks for a moment before replying, “We all sang. It wasn’t springtime. It wasn’t a swallow.”