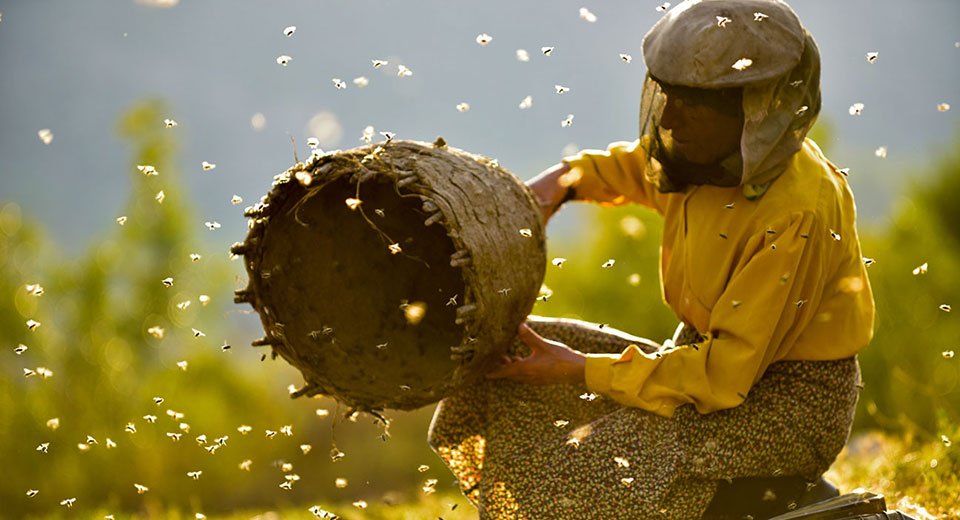 Honeyland fills an important void in the recent influx of films about bees, beekeeping, and the worldwide honeybee crisis. Whereas most issue-driven docs have a tendency to tell, not show, this one sets itself apart by focusing instead on the emotional journey of an often overlooked human player in the story of the bees: a wild honey hunter, whose life is inextricably tied to the health and vitality of her bees. Hatidze lives in rural Macedonia, in the stonewalled ruins of an abandoned mountain village, where she spends her days tending to wild bee colonies, and her nights caring for her blind and paralyzed 85-year-old mother by candlelight. She lives an isolated existence, with wild dogs, cats, and bees as her only companions. A prospecting family of nomads suddenly arrives to settle for the summer, disrupting Hatidze's peaceful existence with their two trucks, seven children, and an enormous herd of angry, fearful cattle.

At first Hatidze is suspicious, but she quickly warms to her new neighbors and the renewed energy they bring into her daily life. But with so many more mouths to feed, the family's patriarch decides to take up beekeeping in addition to raising cows and growing corn — anything he can to make a buck, even if that means treating his animals (and his children) with less care than Hatidze does her bees. The violence of human desperation and animal suffering simmers to the surface, at times making for uncomfortable moments, but never so much as to cause us to look away. A thoughtful and tender portrayal, and a welcome addition to the ongoing investigation into the relationship between humans and bees.