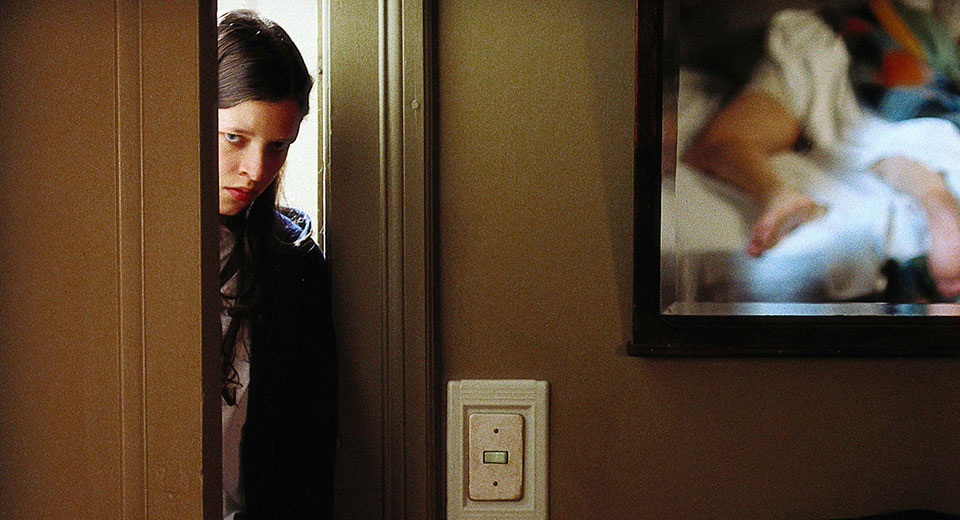 A film defined by chance encounters amid a thick atmosphere of sexual impropriety, Catholic anxiety, and confusion and coincidence, The Holy Girl's narrative unfolding echoes young Amalia's experiences during an especially formative period in her development into womanhood. Sparked by her instructor's struggles to explain vocation, interrupted as it is by her friend Josefina's whispered tales of said instructor's epileptic fits while "tongue kissing," Amalia becomes convinced that a subtle below-the-belt encounter with a strange man is a sign from God: her mission is to save this man from his pernicious ways. Though this is the inciting event of The Holy Girl and of Amalia's forthcoming confrontation with the disappointments and shame accompanying adulthood, the film’s focus shifts to her mother Helena, proprietress with Amalia's uncle (who is seen to sleep in the same bed with mother and daughter) of the hotel housing the medical congress of which Dr. Jano, the groin mentioned above, is a participant. Amid her struggles with her colleagues’ judgement, news that ex-husband's new wife is now pregnant with twins, and a persistently ringing ear, Helena embarks on a reciprocated flirtation with Dr. Jano, who is both married and unaware of Helena's connection to the uniformed schoolgirl he's glancingly corrupted. So the scene is set for a rude awakening for young Amalia.

The second film in Lucrecia Martel's Salta trilogy, The Holy Girl is nearly miasmic with the rich mood and symbolism constant to Martel's work; here her familiar mid-height framing, which frequently trims her characters' scalps or lops off their heads completely, emphasizes not only the anonymous and anomalous intimacies of Amalia's surroundings, but also her insistently anti-intellectual spirituality, centered as it is on lengthy memorizations, fervent prayers, and furtive fingertipping. The hotel itself, with its decaying fixtures, "thermal" pool, and aura of sinful permissiveness (one of the maids is constantly interrupting the action to spray air freshener), provides a fitting though perhaps a bit on-the-nose backdrop for the revelation to come. Motored by disturbing misapprehensions, interrupted by strange miracles (accompanied by little to no fanfare), and peppered with sweet moments of female friendship, The Holy Girl is a unique, stressful evocation of the perplexities of puberty. It screens in Anthology's fantastic female coming-of-age series "A Real Young Girl," featuring films directed by women.