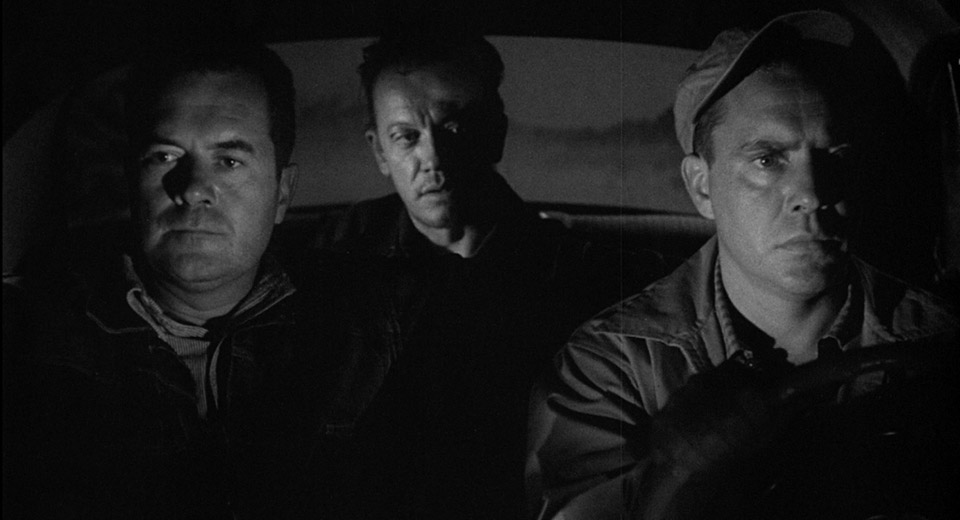 Tonight Alamo Drafthouse observes the centenary of maverick actress-filmmaker Ida Lupino with a screening of The Hitch-Hiker, her fourth feature as director, recently restored from the camera negative by the Library of Congress and released by Kino Lorber. The film is a ripped-from-the-headlines dramatization of the crimes of Billy Cook, a juvenile delinquent who bounced from reform school to the penitentiary to dishwashing jobs before drifting through the southwest robbing and killing motorists in 1950. Lupino had visited Cook in San Quentin to secure his story rights and interviewed his surviving victims before filming, but after the MPAA, which had received complaints from the Justice Department, rejected the original script on the basis of its perceived glorification of Cook's crimes, names were changed and the story was further fictionalized. Nevertheless, Lupino is not interested in Cook's crimes so much as the dynamics of male-male relationships, creating what scholar Lauren Rabinovitz describes as a "No Exit of masculinity confronting its constituent parts."

Here we join Roy (Edmond O'Brien) and Gil (Frank Lovejoy), old friends headed to a fishing trip. En route to their destination bachelor Roy steers toward an out-of-the-way Mexicali brothel, and while family man Gil tries to rally his excitement, he ultimately feigns sleep, forcing Roy to roll on—until the shadow of Emmett Myers's (William Talman) thumb stretches across the road. He offers few niceties before pulling a gun on the men, initiating a series of psychological power plays. Myers attempts to drive a class wedge between the men: in response to the captor's questioning, Roy identifies himself as a mechanic, and Gil an architect. "So you're the smart one," Myers replies. Later in the desert Myers fires at a stray creature and misses his mark: "Guess we won't be having rabbit for dinner," mouths off Roy. Big mistake: moments later, Roy's on the receiving end of a William Tell act with untrained shot Gil forced by Myers behind the trigger of a rifle. And so the games continue as Myers pushes the pedal deeper into Mexico.

One of the unforgettable features of The Hitch-Hiker is Myers's paralyzed eyelid, which can never shut -- so the men never know when he's truly asleep. The seemingly inert organ is a source of incredible tension, and although inspired by Cook, it's tempting to think of this as a meta-cinematic gesture: there's nothing quite like watching men squirm under Lupino's own incisive, unflinching eye.