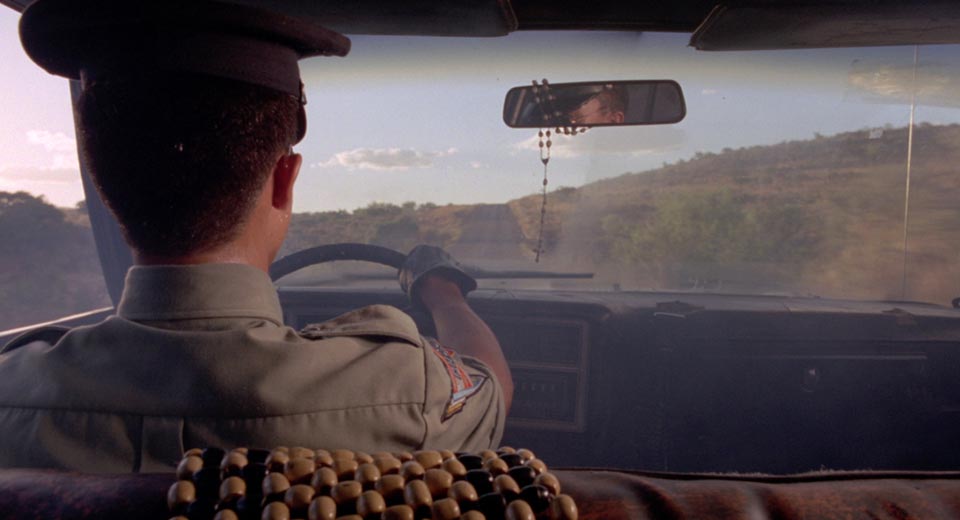 It isn't difficult to see why Highway Patrolman remains one of Alex Cox's more obscure movies. It was shot in northern Mexico with an all-Mexican cast; all the dialogue is in Spanish; and, unlike Hollywood drug war/migrant epics, Cox's movie isn't interested in Mexico as an appendage to psychodramas happening north of the border—it's interested in modern Mexico and its inhabitants, and not much else.

The plot follows the career of Pedro Rojas (Roberto Sosa), a line-toeing police cadet plucked from the academy to join a fictitious version of the Mexican highway patrol. After a quick lesson in law enforcement—"When you're following a vehicle, stop it first, then decide what they've done."—Pedro is handed a rifle, a pistol, and a patrol car (he brings his own beaded cushion to throw over the front seat), and he dutifully sets off to fill his monthly quotas in his allotted slice of "hell." Pedro finds what you'd expect on the road: bribes, smugglers, gringos—also a wife and a gunshot wound. Mexico's entrenched corruption is on display. But, rather than caricature the country's problems, Peruvian-American screenwriter Lorenzo O'Brien's script—adapted from interviews with a real former patrolman—gives us moral ambiguity, and the kind of obstinate good humor that's embodied in a nun tenderly asking a patrolman to share a cigarette.

Highway Patrolman has plenty to say about the hazards of living in a world where rule of law rarely functions. But its real ambitions seem more in line with putting its characters in the kind of complex moral dilemmas that Akira Kurosawa perfected in movies like Ikiru, High and Low, and Stray Dog. In a way, that seems to have always been Cox's goal—with Kurosawa as the explicit gold standard. But, it took going to Mexico to find the right actors, landscape, and source material to finally pull it off.