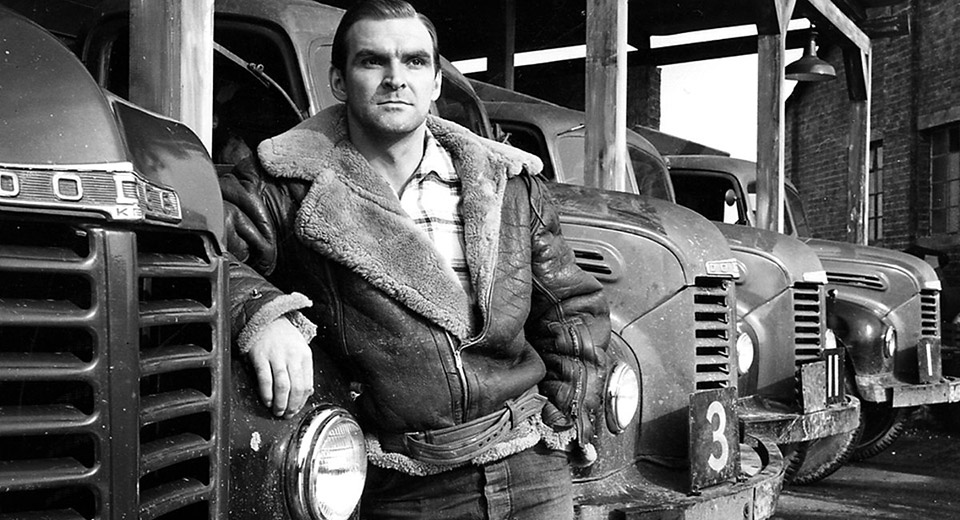 Blacklisted expatriate Cy Endfield's Hell Drivers (1957) was inspired by 1940s movies about the haulage industry, from Raoul Walsh's They Drive by Night (1940) to Jules Dassin's Thieves' Highway (1949). Who knew that a movie about trucking could be this nail-biting? It's Howard Hawks's Only Angels Have Wings (1939), but instead of the Andes with airplanes it's England with trucks. Both are about brave men doing a low-paying, dangerous job, often dying with little ceremony and no glory. While Cary Grant's airmail pilots face a vicious mountain range that throws fog and vultures at them, in Endfield's film the challenge isn't the road itself but the ballast drivers' fiercely competitive spirit.

In his first leading movie role, Stanley Baker plays Tom Yately, an earnest guy with a criminal record who's been drifting around Buckinghamshire looking for an honest living. At Hawlett's Contractors (Get it? "Haul-it"?) a spot has just opened up due to a death in the team. The fast-talking boss, Mr. Cartley (Get it?), tells Tom that his predecessor "couldn't handle the loads, not at the speeds we wanted." The haulers (a young Sean Connery among them) have a running bet: whoever delivers the most loads in a day wins a gold cigarette case. Red (Patrick McGoohan), a cigar-chewing maniac who looks like Ryan Gosling with a liver condition, has become the reigning champion by mastering a death-defying shortcut through the limestone quarry. Naturally Tom decides to either defeat him or die trying.

Although most of Hell Drivers is sped-up footage of 10-ton dump trucks screaming around tight bends, there are moments of real tenderness. When Tom first meets Gino (Czech-born Herbert Lom), a former POW who prays at a homemade altar and dreams of returning to Italy, they weave a tight bond out of their respective ex-con and immigrant subalternities. Gino is an affable walking cliché, as likely to exclaim "Mamma mia!" as to call his girl "bellissima." Then there's the devastating gala dance, where respectable townsfolk and teenage Noam Chomsky lookalikes turn up their noses at the rowdy truckers, who inevitably start a brawl. Prudent Tom avoids the fighting and is thereafter ostracized as a "yellowbelly," making his life even harder. A year in prison is no joke, but society's reproach is for life. As much as Tom would like to forget his past, his past won't forget him; instead it keeps heaping difficulties on him like a Nascar pileup. As his mother says, "It's not past—it's here. I live with it every day."