He Who Gets Slapped 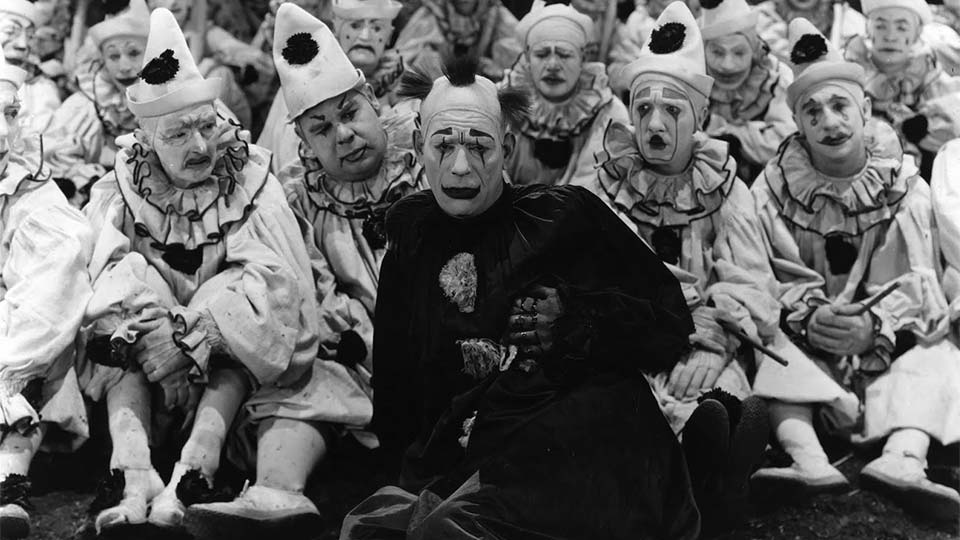 Among right-wing trolls—the wretched of the internet who tweet frog memes, organize TIKI Torch marches on 4chan, and constitute a portion of the third or so of the unfortunate Americans who will admit to supporting the country's president—the word “cuck” has recently come into favor as the greatest insult. For our present moment’s most base, morally bankrupt and intellectually vapid sponges of degeneracy—the people of the lowest kind one is likely to meet that anyone could imagine—the worst quality their diseased hivemind can summon is to be the cuckold. And no actor has represented this trait more proudly and sympathetically, nor thoughtfully in all its tragic and grotesque dimensions, than Lon Chaney—and perhaps never more effectively than in Victor Sjöström’s He Who Gets Slapped (1924).

Chaney plays Paul Beaumont, who we meet as a formerly struggling scientist who has just made a major breakthrough thanks to the financial patronage of Baron Regnard (Marc McDermott), who also provides him and his beloved wife room and board. Alas, the Baron is also sleeping with Beaumont’s spouse—and when the scientist is due to present his findings before an academy of esteemed colleagues, his duplicitous benefactor further steps in to claim credit for the work. Beaumont protests and is mocked by the most illustrious members of his field as the Baron slaps him across the face—and when he appeals to his wife for sympathy, she reveals the affair and calls her husband a clown.

With intertitles that describe Beaumont’s need to laugh to keep from crying, we are reintroduced to him in his new profession as HE Who Gets Slapped, a popular circus clown whose act consists of being repeatedly smacked across the face. One night the Baron sees HE’s act without recognizing Beaumont and instantly becomes infatuated with the beautiful stunt horse rider, Consuelo (Norma Shearer). She is in love with her partner, Bezano (John Gilbert)—but her impoverished father finds opportunity in the Baron’s desire. Beaumont is in love with Consuelo, too, and viewing the Baron’s aggressive courtship of sees a chance for revenge. To drop a semi-oblique spoiler: it’s fitting that, as MGM’s inaugural production, this is the first movie to feature the studio's iconic lion logo.

Although Chaney’s roles as a varyingly sympathetic, self-immolating masochist are most popularly associated with Tod Browning, He Who Gets Slapped was one of the first American films directed by master Swedish filmmaker Sjöström (as Seastrom), also known for The Phantom Carriage (1921) and The Wind (1928). Chaney is brilliant as a man who has chosen madness over grief, but Sjöström’s surrealistic asides and clever cutting during HE’s almost hallucinatory act further point toward a perverse possibility of pleasure in reliving past betrayals—and, perhaps, the grim satisfaction of holding up a mirror to his audience’s own vileness. “How stupid people are,” someone remarks, “to laugh at a clown who lets himself be slapped.” When HE looks out during his act and sees nothing but clowns staring back, there can be no mistaking about what we are to believe of the kind of people who gather to chuckle at cucks.