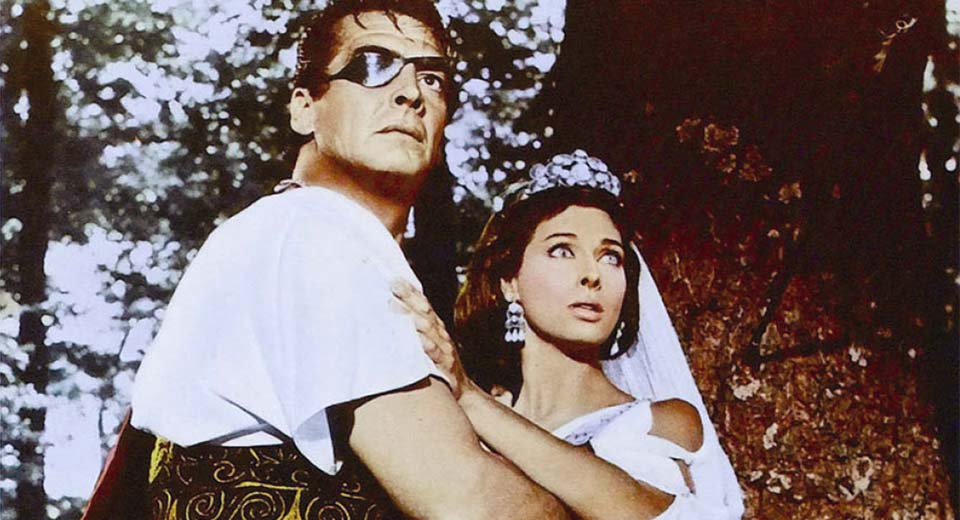 The tortuous career path of the Viennese-émigré director Edgar G. Ulmer took him many strange places. From working on silent westerns with William Wyler and assisting Murnau on Sunrise, he progressed to Universal Studios horror with Boris Karloff and Bela Lugosi and made scare movies on venereal disease and documentaries on tuberculosis. In the mid-1940s, after directing low-budget Yiddish, Ukrainian, and black-cast drama away from Hollywood, he returned there to make a series of dark Poverty Row B-movies that culminated in Detour (1946), that bleakest of film noirs. His reputation for the claustrophobic drama of ill-fated lives culminates with that film, but his career continued through the early 1960s, when he returned to Europe to make three international co-productions as part of the Hollywood flight to Cinecittá, which swallowed and ended the careers of several American auteurs, and which Vincente Minnelli dramatized in Two Weeks in Another Town (1962).

Hannibal (1959) was the first of these. Starring Victor Mature as the Carthaginian general who crossed the Alps with an elephant army to battle the Roman Republic in 218 BCE, Hannibal is a mid-budget epic shot in Yugoslavia, the Italian countryside, and studios in Rome. In a bigger-budget film, Hannibal would have been played by the pan-ethnic everyman lunk Anthony Quinn, who starred in the title role in Richard Fleischer’s Barabbas in Rome the next year. In Ulmer’s film, Mature, at this point in his career bored with acting, does not try for the kind of florid, outraged dignity Quinn brought to such roles. Mature comes across as some combination of a distracted, aging Benicio del Toro and an irritated, suntanned John Boehner.

At the film’s end, when Mature’s defeated Hannibal faces a tragic future of endless war, Ulmer shows Mature in close-up, in an unexpected superimposition, as he chants “march... march... march” over shots of his forlorn army, accompanied by narration about fate reminiscent of the narration that ends Detour. As Ulmer’s career was running out of time, it’s a fitting image for his ceaseless activity in the trenches of cheap filmmaking. Hannibal loses an eye in the film, and Mature’s eye-patched visage looks out at the audience, his broken gaze reduced to a single lens like Ulmer’s camera.

Ulmer juxtaposes the struggle of vast armies of extras on the battlefields of Cannae with studio inserts of lone soldiers filmed against a blue-sky backdrop, an extension into epic filmmaking of all the blank walls in his noirs. These shots, in which soldiers are speared or get a hand lopped off, are similar to the single shots of Greek warriors that interrupt the narrative flow of Godard’s Contempt, and also call to mind the plein-air investigations of antiquity in Straub-Huillet and Pasolini. Ulmer’s use of half a dozen or so real elephants to indicate Hannibal’s elephant cavalry now exists as a vestige of pre-CGI, pre-ASPCA filmmaking. Their march through snowy cliffs and a Roman soundstage is a sad reminder that points backward to silent Italian epics like Cabiria and to Edison’s Electrocuting an Elephant, as much as it does to the European art cinema that looked to Ulmer for inspiration and replaced him.