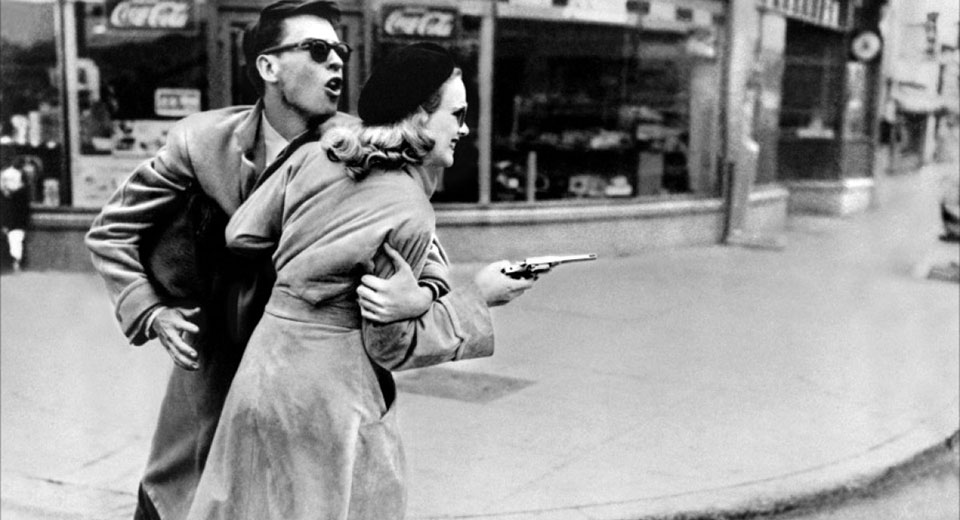 The legend goes that in 1964, screenwriters Robert Benton and David Newman were trying to get François Truffaut to direct their screenplay based on the story of Bonnie and Clyde. Truffaut, in order to help the duo, arranged for a screening of Joseph H. Lewis’ Gun Crazy —at which Jean-Luc Godard was sitting in the front row. It’s not hard to see the range of Gun Crazy’s influence from the French New Wave to New Hollywood films like Arthur Penn’s Bonnie and Clyde. Gun Crazy (with a script by Dalton Trumbo) is a movie that, along with films like Edgar Ulmer’s Detour, managed to expand what a B-movie could be. Buried as a “cult film” for years, Lewis’ film plays as part of the Edgar Wright-approved Heist Society series at BAM.

John Dall stars as Bart, a gun-obsessed man we first meet in his youth, stealing a gun out of a hardware store window. After a stint in reform school, then the army (though he is reluctant to speak about his service), Bart returns to his hometown to start anew. His first night home, however, he crosses paths with Annie Laurie Starr (Peggy Cummins), the Annie Oakley-esque star of a carnival sideshow. It’s the old story: boy meets girl, boy beats girl in a novelty shoot-out, boy joins the carnival to be with her. But soon, Bart and Laurie are fired and on their own, and resort to robbing drugstores—then even more risky and profitable places—to fund the life that Laurie craves.

Laurie is the story’s femme fatale, but unlike many film noir anti-heroines, she is straightforward with what she wants. She warns Bart before their impulsive marriage that she’s no good and never has been; once the money runs out, she tells Bart, “I want things. A lot of things, big things.” Bart makes the choice to go along with Laurie’s plan to get things. Also unlike most noirs, Laurie and Bart actually love each other. Near the end of the film, Bart wearily notes that he and Laurie belong together like guns and ammunition. Somewhere along their crime spree, the rush of lust and excitement from a robbery turns to real love, so much that they cannot even bear to part for a few months on the lam. The heart—and the erotic core pulsing right beneath the surface—of Gun Crazy is that authentic relationship.