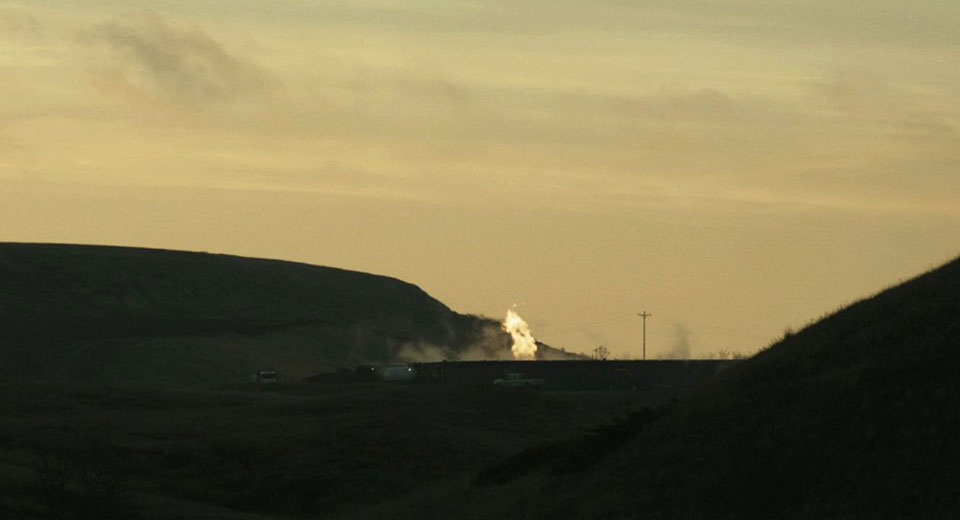 Austin Lynch and Matthew Booth’s debut feature Gray House makes its North American premiere tonight at Film Society of Lincoln Center. A haunting and audacious hybrid doc-narrative, the film is a powerful meditation on American identity and ecology, featuring gorgeous landscape photography, evocative soundscapes, and astonishing interview footage with ordinary Americans laboring in the energy and prison industrial complexes. Lynch and Booth take us to places we’ve likely never been and might never have seen were it not for their curiosity and insight, making the invisible visible in a way that is both deeply disturbing and profoundly moving.

Lynch and Booth contrast the monotony of industrial architecture with the dignity of the natural landscape, setting the scene for an investigation into the causes and effects of isolation, order, and control. The humans in the film are not so much characters in a story as figures against a backdrop of their own design—or animals inhabiting their environment, responding in different unexpected ways.

One woman, a lifelong prisoner of the titular “Gray House” confides: “If it weren’t for the trees… I can look at them, and sometimes I don’t even see the barbed wire, or the chain-linked fences at all. If I stare long enough, I can just see the trees. I’ve always loved the mountains. I love the soil, I love my trees. Those things, and my children, I miss the most.”

What’s shocking is how human she is. How beautiful, how intelligent, how sensitive and true. The dehumanization of incarcerated individuals may be familiar in the abstract, but the intimacy of these interviews elicits an engagement far more empathic than any statistic or data visualization could ever achieve. This is the power of story. For all its experimental qualities—formal choices that push the limits of narrative cinema—Gray House is, ultimately, a very carefully crafted, highly structured visual narrative that shows so much more than it could ever tell.