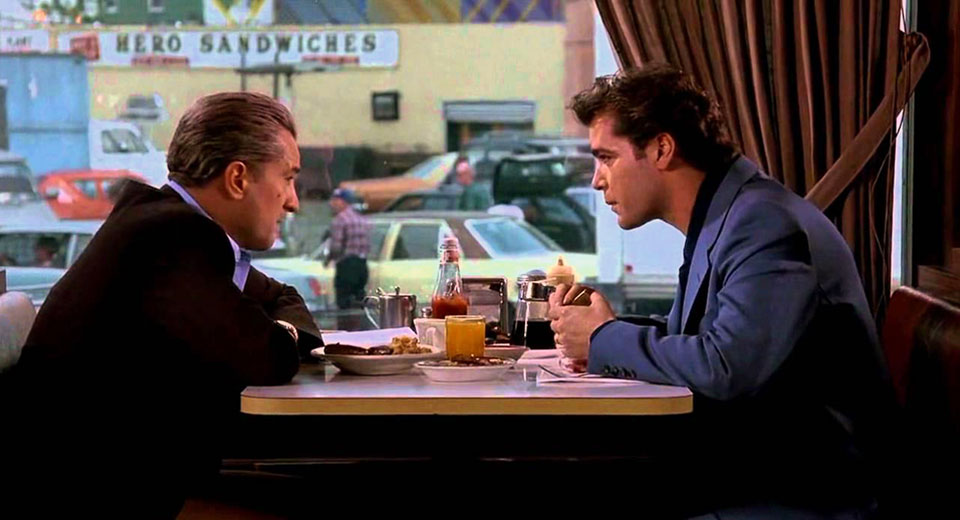 On a very short list of Great Movies with almost nothing to say, Goodfellas remains embarrassingly entertaining, an unparalleled cinematic seduction. It is a feature-length set-piece, a 150-minute montage that leaves drooling viewers in its wake. To bend the old Hawks formula, the film consists of a dozen great scenes and no interesting ones. Those great scenes, too numerous to list, are seared into memory: “get your shine box”; the meat truck; the bullet to Tommy’s head; the garlic sliced by razor blade; “Funny like a clown?” Each moment, regardless of its inherent horror, is rendered immaculately at incredible speed. The Godfather may be far less accurate in its depiction of gangsters, but it’s a film of ideas concerning the social contexts of organized crime while Goodfellas overcomes an utter lack of insight with a surfeit of documentary detail. It’s tough to tell who’s having more fun in the film, Tommy using his mother’s butcher knife on a half-dead adversary or Scorsese and editor Thelma Schoonmaker weaving the thump of Harry Nilsson’s “Jump Into the Fire” throughout protagonist Henry Hill’s coke-fuelled meltdown.

Its enduring reputation as Scorsese’s magnum opus is a function of palatable and non-threatening style. Viewers aren’t invited to recoil from the horrors of the film’s violence and aren’t provided with a spare moment for such reflection in any case. The next kill or quotable exchange is a smash cut away, because who needs a forest when you have all these wonderful trees and a Phil Spector soundtrack? Scorsese’s comedic treatment of the film’s violence is problematic only because he simultaneously emphasizes the authenticity of the entire project. Viewers are similarly eager to have it both ways: a no-bullshit, straight-dope, really real gangster movie with a rollicking, cartoonish tone to keep the sociopathy at bay.

Can we forgive ourselves this cognitive dissonance? A thousand times yes. Ultimately, Goodfellas has more in common with Die Hard and Mad Max: Fury Road than The Godfather or Scarface. It is a pure action film, heavy on visceral impact and light on most everything else. Shifting the film’s context from Serious Great Film to Action Marvel reduces conscientious objections, clearing the runway for a full-body good time. Movies like this set the pleasure centers afire and the entire world becomes more vivid for hours or days afterward.There may not be a more intoxicating film than Goodfellas. It is superlatively euphoric and deeply deceptive.