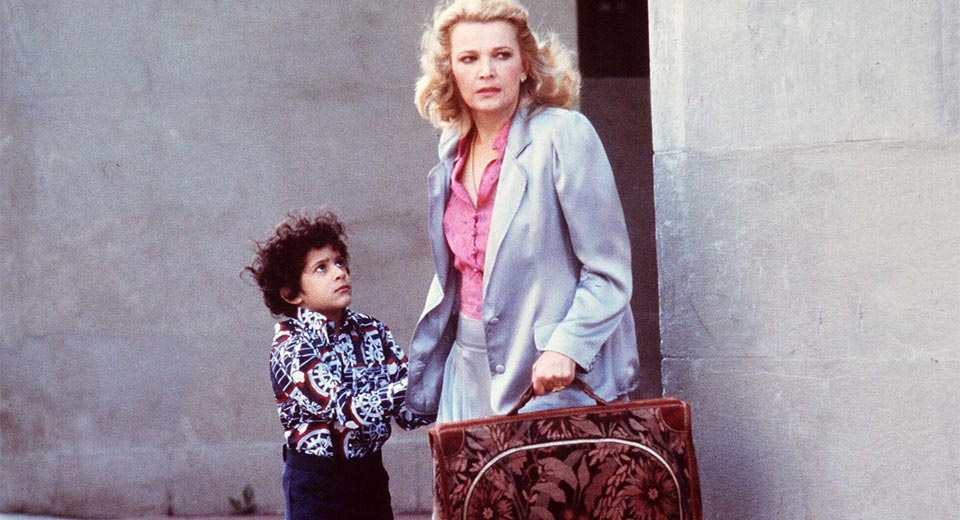 Although John Cassavetes—default idol of every younger-than-Jesus contemporary filmmaker—was living in Los Angeles in 1979 when he wrote Gloria, his “adult fairy tale” about Italian gangsters trying to kill a six-year old boy (Juan Adames, cast for his “toughness”), it turned out a heartfelt ode to the city he grew up in. He lamented that “the pictures that are made about New York never concentrate on neighborhoods,” so he decided to make Gloria first and foremost a Bronx movie. After the mandatory opening Manhattan skyline shots we fly over Yankee Stadium and the Major Deegan, then swoop down to a bus crossing the Macombs Dam Bridge with spindly teenagers riding on the rear bumper. This is New York—wild, dirty, and dangerous. When watching Gloria, try to spot as many elements of lost New York as you can: graffiti-enveloped subway cars, phone booths on every corner, and the once-iconic WALK–DONT WALK signs that baffled foreigners from the mid-50s to 1999. (The last holdouts weren’t replaced by the DOT until about a decade later.) Another thing that’ll surprise anyone who’s accustomed to hyper-securitized post-2001 New York is that whenever Gena Rowlands whips out her gun in public—whether on a Bronx street or in a Penn Station diner—none of the bystanders seem put off. At most they look kind of irritated, as if she were asking for change.

“I wrote a very fast-moving, thoughtless piece about gangsters. And I don’t even know any gangsters!” admitted Cassavetes. He did, however, get to know some during the shoot. The fat mobster in the powder-blue suit jacket is a real hit man, who advised Cassavetes on the climactic scene in the sparsely furnished New Jersey palazzo of Tony Tanzini (Basilio Franchina, who had been a scriptwriter for Fellini and De Sica). I don’t know how many of the bizarre details of this scene to attribute to the underworld consultant’s pointers (the tablecloth rolled up halfway for the elderly Don’s lunch, the sweaty men in nothing but towels in a back room), but by remaining totally unexplained they give the scene a weird sense of authenticity. One of Dostoevsky’s story-writing principles was that instead of explaining away every action, object, and motivation, an author should trust the reader to draw their own conclusions and to form their own judgments. Here Cassavetes followed this sage advice, leaving us with a lot to guess at.