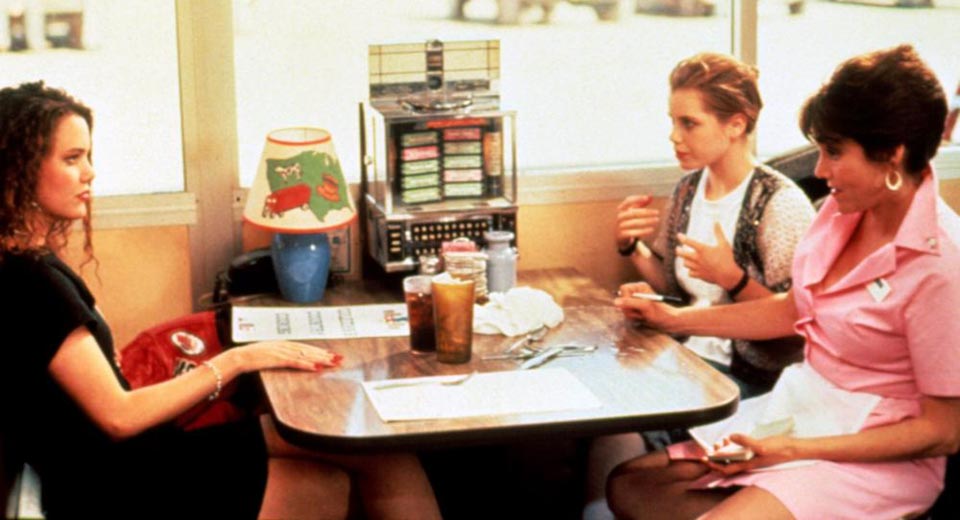 "Women are lonely in the nineties. It's our new phase," declares greasy-spoon waitress and single mom Nora (Brooke Adams). And given the world of Allison Anders' 1992 film, Gas Food Lodging, it is hard to disagree with her. Set in the small and dull desert town of Laramie, New Mexico, the film follows Nora and her two teenage daughters Trudi and Shade, played splendidly by Ione Skye and Fairuza Balk, as they each attempt to cure their own loneliness and heartbreak. Because, ironically enough, in spite of living within arm's length of one another in a trailer park, each woman feels terribly alone. Though each one is searching for the same thing—love in its every form—they each go about it very differently, Trudi chasing boys that are only interested in using her, and Shade finding salvage in the matinee screenings of melodramatic Mexican films. The only one who seems to have given up on the hopeful notion of escaping and falling in love is Nora, who after having been abandoned by James Brolin to raise their daughters, is more preoccupied with their well-being than her own.

Striking a unique balance between the misery of ordinary life and the necessary magic of naivety and hope, the film manages to feel very real without losing its elements of wonder and humor. Based on a novel by Richard Peck, Anders’ screenplay does an excellent job of crafting a believable and likable supporting cast, comprised of surprisingly complex and memorable characters. These good-hearted, but often unreliable, men who orbit around the three women are granted more sweetness and depth than the typical lonely cowboy types, making it easy to understand why the women are so often tempted to act against their better judgment.

Including some beautiful desert shots, as well as an unforgettable blue cave lovemaking scene, the film manages to combine dreariness and whimsy, while unfolding a refreshing portrayal of women’s lives. And though each of the characters is tied together by their collective alienation, it is the theme of identity which really binds the work. From Javier, the Mexican American teen who has to combat racist slurs and gangster stereotypes, to a deadbeat dad proving he is actually quite caring and generous, every character is out to prove that nothing is as it seems. However, the most illuminating of these discoveries is the unspoken main protagonist herself: the desert. Which, contrary to her dusty wasteland looks, is actually bursting with life, in its most vivid and diverse forms.