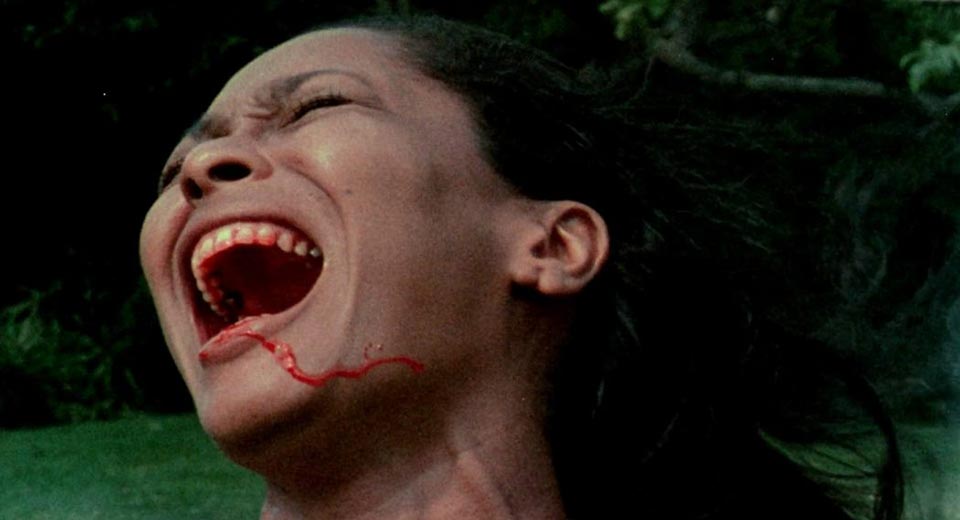 There’s nothing like Bill Gunn’s unclassifiable Ganja & Hess (1973), which starts an extended run at Metrograph Wednesday. Even a purple mouthful like “psychedelic semi-blaxploitation tone poem of vampirism and Christianity”, while not inaccurate, does little justice to the formal experimentation and cultural insight that Gunn offers throughout his second directorial effort. Underappreciated in its day, Ganja & Hess today enjoys a rightful place of honor among heady classics of American independent cinema.

Wealthy academic Hess Green lives a secluded life surrounded in his mansion by anthropological artifacts and religious icons. One night his unbalanced assistant (played by Gunn) stabs him three times (one each for the Father, Son and Holy Ghost) with a relic taken from a lost African civilization. The object infects Green with immortality and a desperate thirst for blood. The assistant’s wife arrives to search for her husband, and instead falls in love with Dr. Green, who stalks blood banks and murders prostitutes to feed his habit.

Gunn edits the film into phantasmagoric shards, erasing the boundaries between Green’s inner and outer lives. In one early fantasy, he’s beckoned on opposing sides by an African Queen and a masked, smirking white man. Throughout, Gunn percussively repeats actions and shots as disparate noise—Christian hymns, mumbling dialogue, mechanical buzzing—crowd the soundtrack. Given how glutted with ideas and cinematic pyrotechnics the result is, it’s little wonder that Spike Lee faithfully remade it in 2014, with similarly unimpressive box office returns. This deliberately disjointed film confounds pat analysis, but at center is the Christianization of Black America. The church’s offerings of community and salvation are on full display, as are its violence against traditional African cultures. As Green navigates this chimeric heritage, Gunn presents genuinely sexy onscreen sex and a host of other visual pleasures in a film that boasts its independence in every frame.