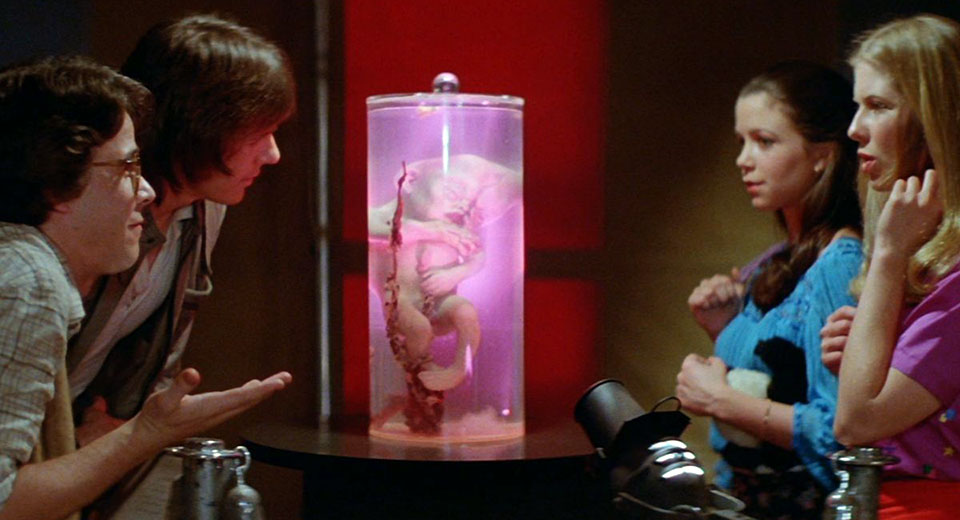 Tobe Hooper gave the world some of the most memorably horrible scenarios and images ever committed to film. The late filmmaker was, maybe more than anything else, an architect of nightmare spaces. A house filled with knick knacks of death in Texas Chainsaw Massacre, a sweltering hotel in Eaten Alive, a monument to the essence of evil, the Marsten House, in Salem’s Lot--all these terribly unreal places, rendered in ghastly detail, served to externalize our most primal human fears (death, animal violence, metaphysical evil, etc).

With his 1981 film The Funhouse, Hooper gives us the most explicit statement on his preoccupation with terrible places. The story is simple: a group of teenage friends decide to spend the night in a carnival funhouse for shits and giggles, and instead of spookshow scares, the result is real horror and murder. From the film’s outset Hooper folds in the formal structures of horror, beginning with a Halloween-esque pov which ends as a gag. When the group of teens arrives at the seedy carnival, the innocent thrills of the film’s “funhouse” beginning quickly give way to the grotesque. The carnival is a collection of sweaty barkers, cheap sex, and genuine genetic freaks—one of whom terrorizes the teens.

Compared to Hooper’s other work, the The Funhouse has a decidedly flatter affect devoid of the filmmaker’s typical optical distortions and psychedelic editing. In place of the usually unsettling aesthetics the viewer gets a work which plays with the layers of horror in funhouse fashion (the killer dons a drugstore Frankenstein mask to disguise an even more hideous face beneath, etc). The Funhouse’s visual language is clean and direct, lending the film a curiously realist take on the artifice of horror. This mediation on the nature of the funhouse, and its relation to the horror filmmaker in general, recalls the final dichotomy which closes John Barth’s Lost in the Funhouse where the artist’s lot is envisioned as a self imposed alienation which destines him or her to “construct funhouses for others and be their secret operator-though he would rather be among the lovers for whom funhouses are designed.” With The Funhouse Hooper proves once again that he was one of horror’s greatest “secret operators”.