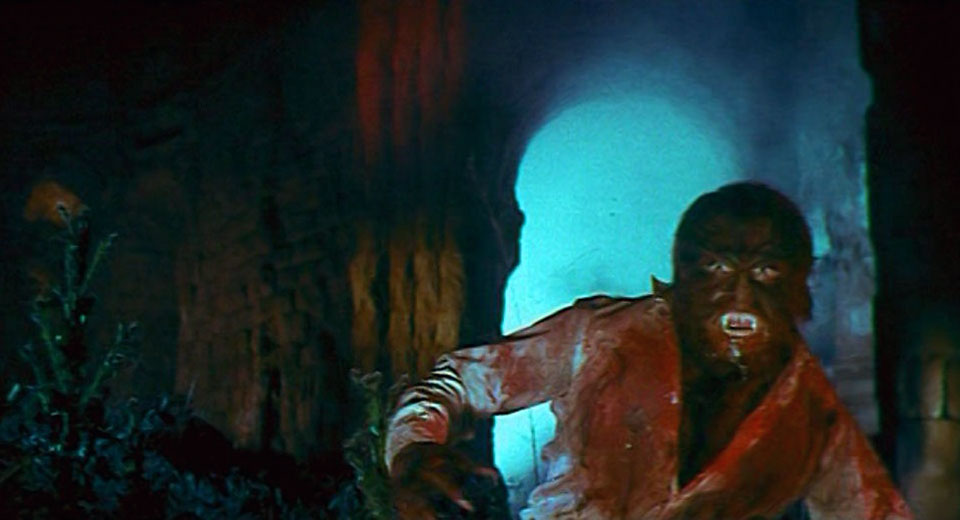 Naschy’s back, and this time it’s personal. Well, for me and other fans of the power-lifting Spanish auter it is at least. Frankenstein’s Bloody Terror is a film that loomed large in both my young-ish mind and in the culture of underground horror movie tape trading for years. A 3-D spanish werewolf film shot in 70mm and starring Paul Naschy (Marlon Brando by way of Peter Cushing)—Naschy fans and horror hounds alike salivated at the very idea of such an unthinkable dream of a movie. The film however was difficult, if not impossible to find, my only personal encounter with it being a dub of a dub of a dub which was degraded into near abstraction, a collection of metallic shadows and white noise. The thought of seeing it in its original 3-D form and on the big screen was pure fantasy, a dream that would never be realized.

Until now that is.

Frankenstein’s Bloody Terror screens tonight at the Quad Cinema at 7:00 pm as part of its Comin’ at Ya! 35mm 3-D series. The film has been available on DVD since 2005 from Shriek Show, but in its original 3-D form, it is an incredibly rare treat. It tells the story of a barrel chested young man, Waldemar Daninsky (Naschy), who after being bit by a werewolf becomes one himself. This seriously impacts his burgeoning relationship with the young woman he loves, and so he seeks the help of two German occult experts who may be monsters themselves. The film represents one of the most beautifully and impressively mounted productions in Naschy’s filmography, a high point he would attempt to match again and again throughout his career. Its gorgeously wide frame and delicious palette of comic book reds and blues are rare in Naschy’s usually dark and turgid work. The melodrama however, of a woman and the monster she loves is one Naschy would return to many times, in essence, the thematic through line which unites each werewolf, mummy, hunchback and vampire he brought to life. In film after film Naschy would retell this tale of tragically fated lovers, each production successively less and less grand than Frankenstein’s Bloody Terror with a few exceptions including the 1981 glorious return to form Night of the Werewolf, itself a remake of another high water mark for Naschy,The Werewolf Versus the Vampire Women.

This story of a monster who simply hopes to be loved despite his fangs and hair is one which on the most fundamentally dumb of levels is relatable to many. It is not Naschy but Nanni Moretti who puts it most succinctly in his masterwork, 1981’s Sogni d’Oro. In the film’s final scene. Moretti’s character is at dinner with the woman of his dreams after a long period of infatuation. Everything is going well until he begins to sprout hair and fangs. The young woman gasps and screams “no” at the sight of the creature across the table from her. Moretti, now a werewolf exclaims the hideous truth we all fear, “Yes, I am a monster and I love you!”. Naschy’s career, his endless attempt to return to the splendor and legitimacy of Frankenstein’s Bloody Terror embodies this desperate desire to be loved. We love Naschy however, not despite his monsterliness but for it.