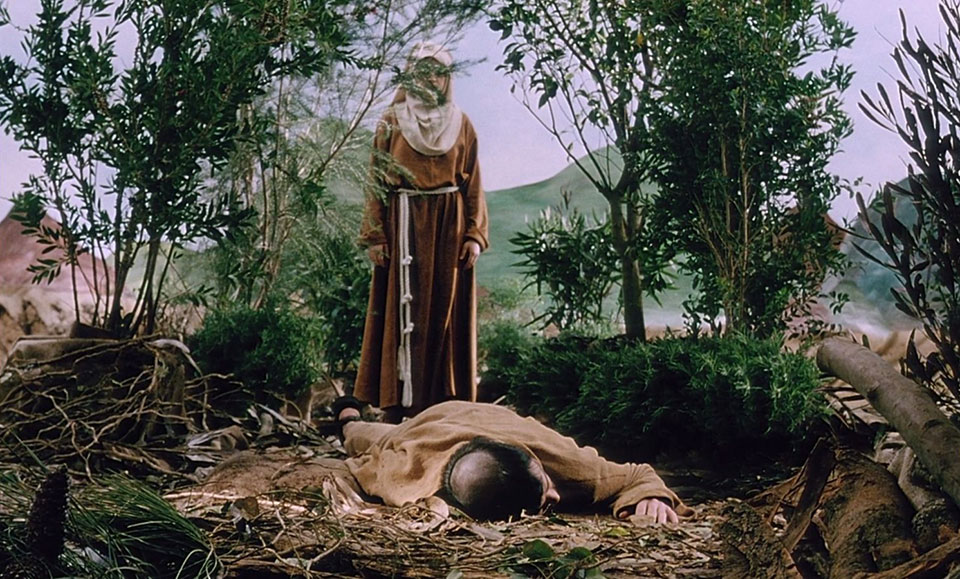 As much a fabulist as a social critic, Miguel Gomes makes films that often feel like half-baked fairy tales — they dazzle with their own striking set of fantastic parameters, yet dodge simple escapism for an emotionally rich terrain of longing and personal failure. With a Rivettian penchant for game-like tales that eschew closure, Gomes’s favorite tactic might be the mid-film rug-pull, sweeping out characters, genres, and tones from beneath our feet in a moment’s notice. His debut feature, The Face You Deserve, starts as a modernist musical about a theater camp counselor coming to grips with turning 30 swerves into a riff on Snow White featuring a motley assortment of full-grown dwarves running around an aging house, playing games, and obsessing over an arbitrary system of rules.

A program of four short films released by Kinoscope and now available via Film at Lincoln Center demonstrates that Gomes’s knack for slightly fantastic and frequently surprising narratives was there from the start. 31 (2001) opens with two text cards seemingly setting up the film’s context. The first recaps the plot of The Wizard of Oz while the second card summarizes Portugal’s 1974 Carnation Revolution. Opting out from connecting these two narratives, Gomes lets the fantasy and the otherworldliness of Oz and the loaded historical context of the revolution simply hover over the action of the film, letting the ambiguity push the audience between fantastical and political readings throughout. Following two privileged kids meandering through the woods after getting robbed at tennis practice, these ambivalent thematics can even feel like a mirror to the pampered disposition of the characters which oscillates between intense engagement in trivial matters and sudden apathy.

Gomes’ films often have a child-like fascination with fairy tales and center on adults yearning for their own youth, but only one of his works, Christmas Inventory (2000), is directly about children. A panoply of sights and sounds taken from one Christmas morning of a large extended family, the film moves between kaleidoscopic montages of wrapping paper, fairy tales narrated over manger scene dioramas, fart jokes at the children’s table, and a political diatribe on the powers of the Portuguese Prime Minister. Gomes’s technique of shuffling between scenes with little apparent logic imbues a sense of wonder and surrealism into the events even as the familiarness of the family’s customs and routines keeps the film grounded and naturalistic.

Kalkitos (2002) takes the notion of arrested development to its fantastical extreme and sets its sights on a group of ten year-olds played by full bodied adults. Turned away from a soccer match by the normal kids for being too big, the unnamed protagonist sulks around the outskirts of Lisbon until he fortuitously finds other adult ten year olds to commiserate and play sports with. Presented in black-and-white with silent-era style intertitles in lieu of dialogue, the film inhabits its theme of temporal regression in its form. This is heightened by the soundtrack — an endless loop of a single Portuguese pop ballad from the 70s that serves not only as tonal accompaniment but also as the film’s sound effects.

Canticle of All Creatures (2006), perhaps the collection’s strongest title, showcases how Gomes’s use of bipartite or tripartite narratives can burst a simple idea into a rich field of poetic ambiguities and associations. The film opens as a folk-rock music video of Saint Francis of Assisi’s Canticle of the Sun, only to take a hard left turn into a stagey dialogue involving Saint Francis and a nun set in 1225, before pivoting into a rousing ode to Saint Francis delivered offscreen by children over documentary footage of animals in the wild. Taken together, these three sections tease out what Francis might mean for a contemporary audience as a poetic abstraction, as a complex historical figure, and as an inspiration for today’s environmentalism. Yet the true brilliance of Gomes’s filmmaking is that these contrasting conceptual interpretations can all meld into a single emotional text.