Fists in the Pocket 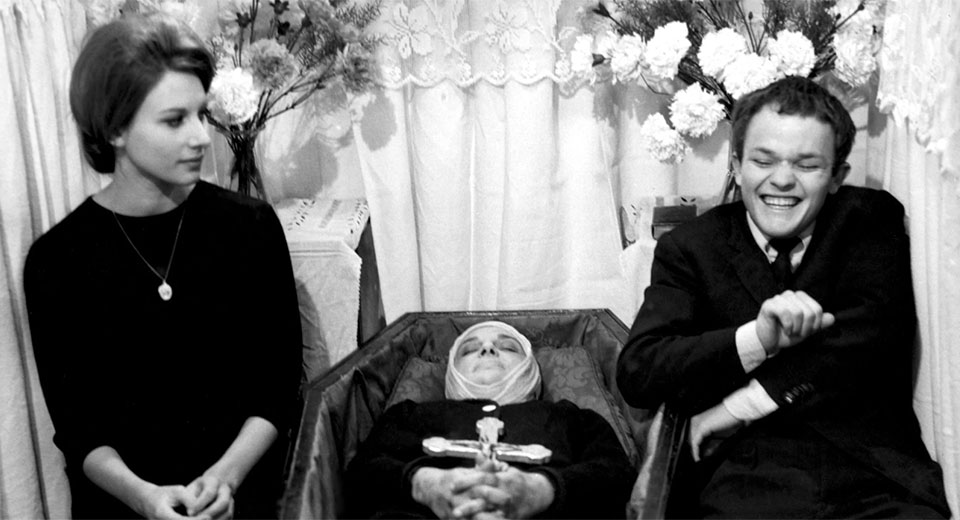 By
Chris Shields
Sandro (Lou Castel) kills his blind mother by, essentially, pushing her over a cliff. At her funeral he feigns grief as he serves coffee to the black-clad mourners and shirks off a conversation about chinchilla breeding. When he is finally alone with the body, he pulls up a seat next to the casket and places his feet on it as if it were an ottoman. Marco Bellocchio’s venomous first feature, Fists in the Pocket (1965), contains many poetic and shocking moments, but this simple, banal gesture seems to say it all: good riddance.

Bellocchio’s radical debut tells the story of ambition, dysfunction, and murder within a cloistered bougeiosie family. Oldest brother, Augusto (Marino Masé) weakly attempts to maintain order as his attention drifts further and further to the world outside the family’s decaying villa. The prospect of his marriage does not sit well with his sister, Giulia (Paola Pitagora), who sends threatening letters to Augusto’s bride-to-be. Sandro, portrayed with blistering, man-child rage by Lou Castel, antagonizes and sulks his way through the villa’s musty halls--aloof and condescending one moment and outrageously destructive the next. The “children” bicker and loaf until Sandro, who hopes to start commercially breeding chinchillas, has a diabolical epiphany.

What begins as an angsty critique of a moribund leisure class, quickly becomes an allegorical indictment of capitalist ambition at its cruelest and most mad. With cool, Kondo-like precision, Sandro dispatches his mother and brother under the pretense of cutting out any trace of incurable sickness from the family. The true dollar and cents logic of this familial “downsizing” however, is even more chilling--with less mouths to feed, Sandro will have the money to start his business.

In perhaps the film’s most exhilarating and beautifully heartless scene, Sandro and Giulia push the furniture from their dead mother’s second floor room sending it crashing into the backyard below. After setting fire to the shattered glass and broken wood, the duo dance around the flames in pagan ecstasy. Bellocchio’s ruthlessly unsentimental vision, like this iconic scene, represents a house cleaning of sorts for cinema, wherein the old must make way for the new.