The Films of Holly Fisher 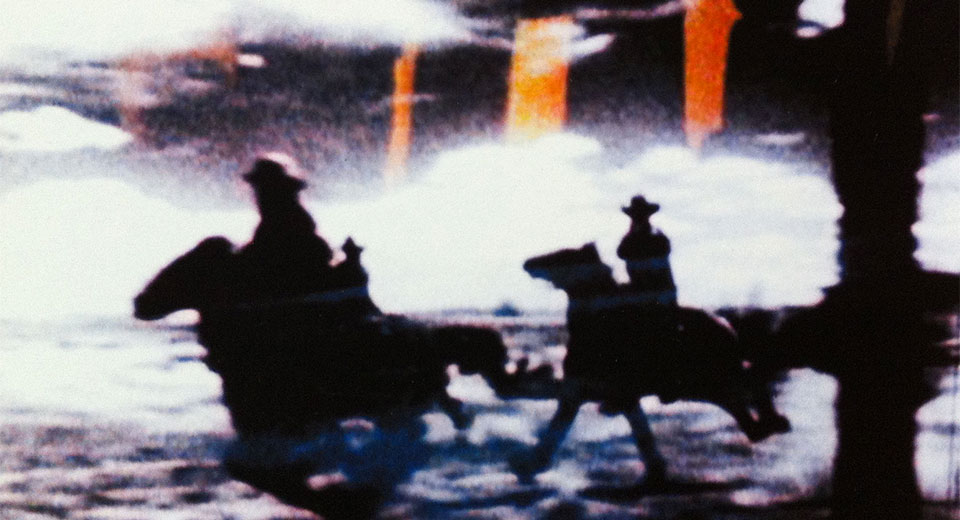 It is a small irony that the retrospective of a career such as Holly Fisher's must be called "long overdue," like a lost library book. Although Fisher has shown widely at home and afield for the past 50 years, one need not feel late to her work, which itself has no truck with linear time. Besides, mounting a series like this any sooner would have meant forgoing the most recent gems. Thankfully, the opportunity to partake in Fisher’s magnetic vision is now – this week and next at Anthology Film Archives.

Tonight's opening program includes the feature Bullets for Breakfast (1992), in which fish skinners, a pulp writer, a poet, and a film theoretician provide alternating, sometimes overlapping, narration for images that ripple frantically over the screen. Occasionally, one frame will snag and still, held overtime in the optical printer for our consideration: the tomato ripening on the sill, the spider mid-weave, the long cord to the bare ceiling bulb.

An appropriated reel of John Ford's My Darling Clementine (1946) is often superimposed over Fisher's own footage of cold, bright mornings in Lubec, Maine. That small town, the easternmost point in the continental U.S., is also the former home of The McCurdy Fish Company, the last commercial herring smokehouse in the country, to which this film serves as something of a memorial. Its workers' everyday crosstalk (on the relative merits of professional wrestlers or how to get the lumps out of your gravy) plays against picture postcards of painted female subjects, used to separate the layers of fish in each carton.

W. Ryerson Johnson knew nothing of cowboys when he started to write about them. Eventually, he got a little curious and set out West to see it for himself. "One of the big mistakes of my life," he reports. He found them dull and ignoble, reading the pulps for which he wrote, fashioning lives from second- and third-hand mythologies. Forbidden from those stories were women, humor, “any social commentary, any significance, really.” Likewise, the poet Nancy Nielsen relays a male historian's excuse for the absence of women from his narratives: that history is a matter of “high politics and war, in which women have usually played no more than walk-on parts.” “High politics,” Nielsen muses wryly, “the kind you ride to in limousines.”

In collaboration with her subjects, Fisher confounds the narrative impulse that stratifies our world and glorifies its demons. This is not to say that she resorts to dry, materialist arguments, as have some other devotees of the optical printer. (Worthy arguments, all!) This work sticks to the sensorium, seldom requesting from the audience a strict apprehension of its technical devices. It remembers that film is something more fluid than a strip of celluloid, that an image is not lost to time as it passes through the projector but can be redeemed again and again as memory.

Bullets for Breakfast will be preceded by Ghostdance for a New Century (1980-2015), a digital update of an old two-channel film. Here, the screen is a dish on which elements concentrate in the center. Its inset frames and their glimmering sprocket holes recall panes of stained glass, inlaid atop each other in an impossible cathedral, producing stirring combinations of consecrated light. The cellist Ha-Yang Kim will perform her original score, and Fisher herself will be in attendance throughout the series.