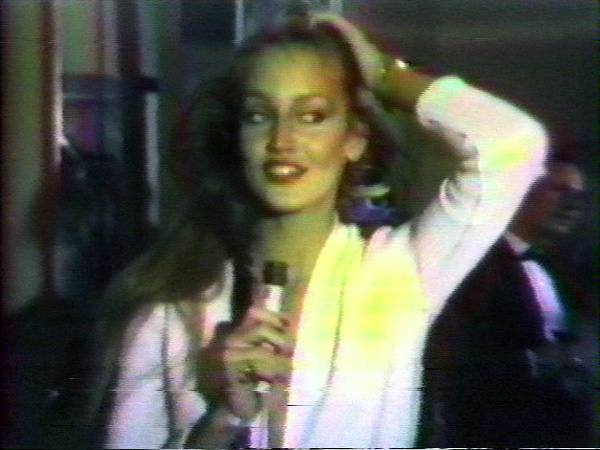 We don’t generally associate the New York’s 70’s downtown scene with video documentation, and certainly not with television. The artists, subversives, scenesters, socialites, and queer culture icons and the legendary hanging-out they did are somewhat shrouded, occurring at the early onset of the digital media era. Television had not yet appropriated from this particular fringe. But in fact, the Max’s busboy/filmmaker Anton Perich, whose short films are being shown over the course of two different programs at Spectacle, was there with a Portapak video camera, taping everything. Some of his friends and subjects, like Taylor Mead, Candy Darling and Andrea Feldman, were appearing in experimental and narrative feature films by Warhol and Paul Morrissey, and others were beginning to do performance art and exhibit video in galleries. For Perich, the galleries were safe and bourgeois, whereas television was the “last taboo for artists… so perfect and sanitized,” inspiring him to introduce “bad quality, bad sound, bad taste.”

Perich’s Max’s Kansas City (1971) was shot over the course of a year or so and invites us to imagine walking into our favorite bar and meeting Jack Smith, Candy Darling, Jackie Curtis, Charles Ludlam, Taylor Mead, Eric Emerson, Ondine, Mary Woronov, Jason Holliday, Holly Woodlawn, Mario Montez and Abbie Hoffman. Andrea Feldman (star of Paul Morrissey’s Heat and Trash) poses outside in just one of many sequences from this film you might recognize, since Perich has allowed documentary-makers to use some of the footage. Feldman dances on the sidewalk and swings on a pole in her white stockings and strange blue housedress. A short time after appearing in the film, she would leap out the window of her parent’s Manhattan apartment in front of an audience she’d assembled for what she termed her “final starring role.”

Perich’s show on Manhattan public access TV prompted some of the earliest television censorship in the United States (networks tended to self-censor, and public access was a recent invention). A particularly illicit program called Mr. Fixit , involving a married couple who take a special interest in a television repairman’s ass – a lightbulb and a jar of vaseline are involved – was actively censored by the cable operator. He literally cut the sound and picture for periods of time during the broadcast, interrupting and resuming the tape’s transmission as he saw fit, explaining afterwards in a disembodied voice, “Certain segments of this tape were deleted on purpose. There was no time to edit it.” The news that Perich was creating totally obscene satire, often featuring gay and transgendered denizens of Warhol’s clan, and televising downtown parties and gallery openings spread. The show was so popular in Manhattan that it prompted a network copycat (which failed to titillate nearly as well and was promptly cancelled).

Perich’s short narrative films were based on improvisation and copious doses of quaaludes, and star some truly amazing people who are too seldom seen on film or video. Beloved downtown icon Taylor Mead figures prominently in many of Perich’s films, including the satisfyingly perverse Candy and Daddy , where he and Candy Darling play father and daughter. The film was shot in the Central Park West apartment of the art collector Sam Green and is a spoof of high society, with Mead decrying his Wall Street woes and sporting an old fashioned Upper East sider’s accent, as he, Candy and her boyfriend (the Broadway actor Craig Vandenburgh) cavort among a fortune’s worth of Warhols hanging on Sam Green’s walls. New York’s aristocracy – as a theme and a preoccupation – shows up in many of the films. In Limo Life , Tinkerbelle, Nancy North, Ramona and the performance artist and gay icon Victor Hugo Rojas tour Manhattan in a white limo, drinking champagne and interviewing each other as if for Page 6. They pause on Park Avenue to sing some show tunes about the fabulously wealthy, and then bring flowers to the grave of “dead art,” which is, of course, The Whitney. In Perich’s Victor Hugo Rojas (1978), the artist performs mysterious and provocative rites with several of his gay friends and lovers which the Whitney would not have shown in 1978. With the commingling between the art world and New York’s moneyed citizens reaching ecstatic heights in the Warhol years, it’s fascinating to get a sense of the resistance and resentment among those whose art was not, by design, a salable commercial product.