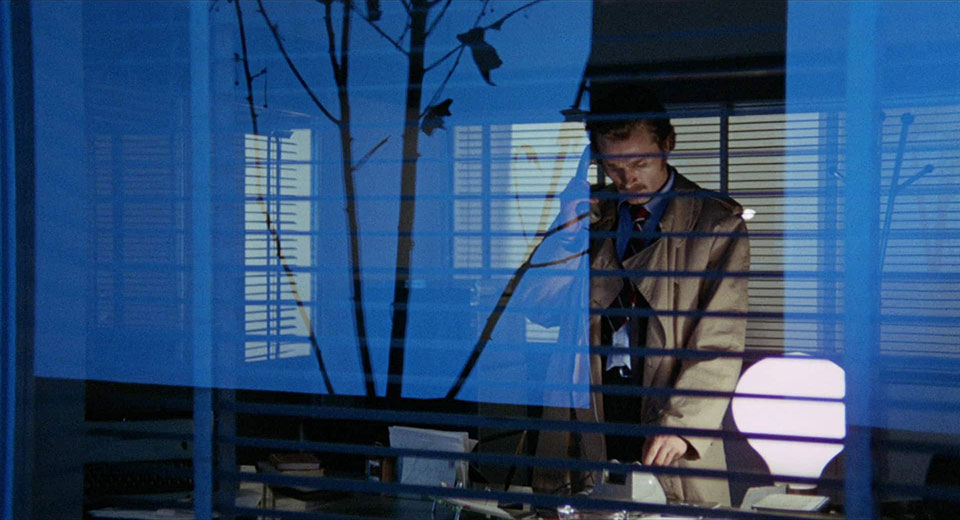 The impossibly beautiful Franco Nero, Django himself, stars as Andrea, a hard living reporter whose lovers, colleagues, and sources begin turning up dead shortly after he visits them. The killer leaves a glove near each body, minus the number of digits corresponding to his progress toward some mysterious countdown. With all eyes glaring his way, Andrea must prove his innocence by discovering the killer’s pattern and preventing the fifth murder. The image of Nero’s magazine-ready bone structure in a turtleneck and Clark Kent glasses poring over a newspaper verges on parody, but it’s counterbalanced when he’s seen chugging scotch behind the wheel.

Storaro fills each frame with saturated colors, wrapping the cast in an amber haze or burying them in indigo. The lighting has a heavy physical presence as its orientation draws our attention even as its sources are obscured. Think of a less literal version of Close Encounter of the Third Kind’s red alien light pouring through the keyhole. The mysterious, nearly surreal arrangements of light refashions Bazzoni’s film as a waking nightmare full of visceral fear that binds together a disjointed narrative. Presented with any of Storaro’s images, no audience can forget that cinema is made of light.