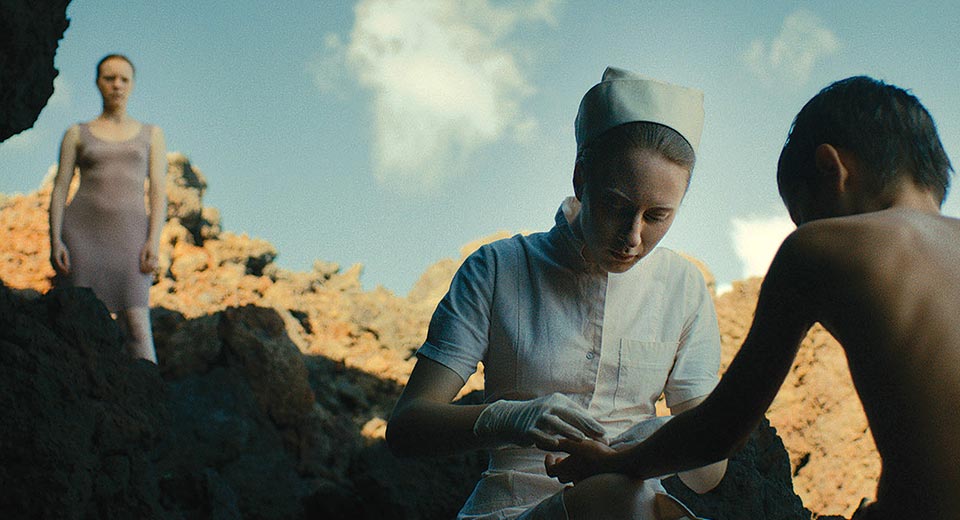 The first few minutes of Lucile Hadžihalilović ’s Evolution take place underwater, the beautiful shots of the swaying flora and fauna of the sea floor and the gently rushing underwater noises lulling the audience into a false sense of security. Let your guard down, Hadžihalilović seems to be saying, everything is quiet under the ocean surface. The spell is broken as young Nicolas jumps into the water and dives, again and again, not looking for anything but perhaps finding…something. Evolution only gets more haunting from there.

After 11 years between her first feature Innocence and Evolution, Hadžihalilović returns with a deeply unsettling, quiet nightmare: the story of Nicolas and a group of young boys just like him, who live on a deserted island with only their mothers and the nurses at the local hospital. Nicolas and his friends are “sick,” and given inky medicine along with their spinach-and-worm-looking meals. The sickness soon takes a turn for the worse, according to Nicolas’ mother, and Nicolas visits the hospital to receive further treatment in the form of a belly injection. But what kind of illness is it? Why are all the boys getting this treatment? And what happens in the hospital after dark?

Evolution provides more questions than answers – questions that will linger in viewers’ minds long after the film is done. As with Innocence, Hadžihalilović paints a dreamy, gorgeous picture of a child’s world, monitored on the outside by nefarious adults. But Evolution goes further, kicking the nightmare imagery into high gear. The identical, shark-like faces of the island’s women, the amputated starfish Nicolas keeps as a pet, the murky pools of water everywhere, the glimpses of blood: these are the things that will stay with me long after viewing.

Evolution is almost a fairy tale, and almost a horror film; it ends up somewhere off the map entirely, an unsettling dream that is too gorgeous to look away from. As the film’s terror ramps up, it becomes a boy’s nightmare version of Cronenberg-esque body horror, their bodies changing and the women in charge of these dreadful modifications. Evolution seems the product of slow, meticulous myth-making, immersing us in a place that is not so different from our own. Hopefully it’s not another 11 years until Hadžihalilović's next film.